As the market crashes, a big question is where does it stop falling? 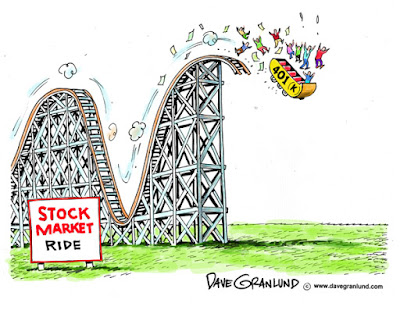 The economy will be in a worse recession than the 2007-2012 "Great Recession" with unemployment rising to 15% and taking a very long time to recover.

Nothing in here is intended to be investment advice or a recommendation on whether to buy or sell securities of any form.

Market downturns can take over 3 years to go from top to bottom with lots of 'rallies' in between.  The "Housing Bubble" crash of 2007-2009 took a relatively short 17 months with at least 6 rallies along the way - 3 rallies of more than a month - click on chart below to enlarge:

We are currently in a "rally" retracing 50% of the previous drop.  That is a standard type of rally in a bear market - 50% "retracement" is the norm.  While nothing is certain, it is hard to believe it will persist with the widespread economic devastation that is already starting to manifest itself.  More "normal" is a "testing of the previous lows" as the standard market jargon has it.

According to the President of the Wells-Fargo Investment Institute, since 1929, there have been 13 "waterfall" market crashes like the one in March. Each one was followed by a 50% "rally" (i.e., a retracement of lost value) like the one we see now in the above chart.  Every single one of those rallies failed and the downward trend resumed.  In 9 failures, the market reverse broke through new lows, in 3 the market hit the previous low and bounced off of that, and in 1 rally failure, the market stopped just short of hitting the previous low.  More here:
https://ca.finance.yahoo.com/video/unusual-unprecedented-bear-market-only-133138091.html 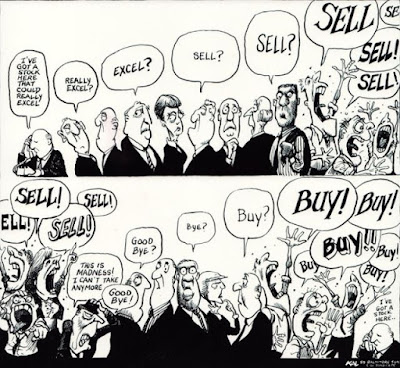 With unemployment predicted to be 18.8% in California by May, with auto sales projected to be under 12 million in 2020 vs 17 million in 2019, it is hard to see how this gets better in less than 2 years. 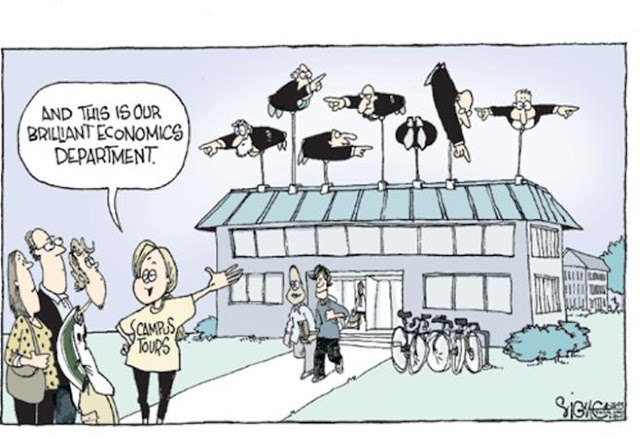 Dr. Nouriel Roubini of NYU accurately predicted the 2007 crash several months before it actually started.  His view is that the coming downturn will be worse than the "Great Recession" of 2009 when the market fell 58%.  Dr. Roubini interviewed here
https://www.youtube.com/watch?v=lKh_DBNBsEE&t=1s

We expect this to be on par with the "Great Recession....We expect a U-shaped recovery but it could be far worse." - S&P Global U.S. Chief Economist Beth Ann Bovino:
https://www.youtube.com/watch?v=wNvHKQkXWuA

'More than 45 million Americans,' could lose their jobs in a possible 'worst case scenario' (= 30% unemployment rate).  Quoting a study coming from the St. Louis Federal Reserve.  "...this resulted in a total number of unemployed persons of 52.81 million. Given the assumption of a constant labor force, this resulted in an unemployment rate of 32.1%."  From:
https://www.stlouisfed.org/on-the-economy/2020/march/back-envelope-estimates-next-quarters-unemployment-rate

Stifel's Chief Economist Lindsey Piegza presents more "optimistic" view that unemployment could peak at 15% with a slow recovery.  Economy was already in downturn before the CoVid-19 shock:
https://www.youtube.com/watch?v=7fXptvDsPgU 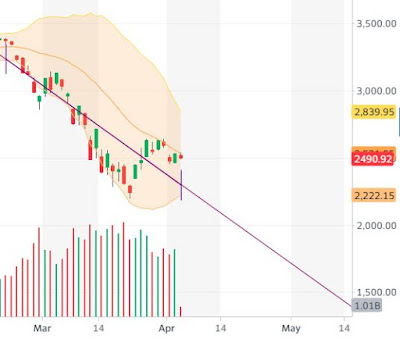 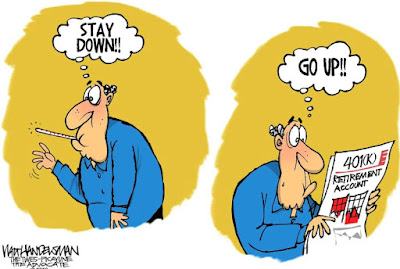 The timing is likely to be considerably longer than the few months the regression curve indicates.  Significant downturns have always had intermediate rallies which can last for months.  The "dot-com bubble" in 2000 took 3 years to go from peak to trough.  The "housing bubble" of 2007-2009 took 1.5 years to do the same.  The "Crash of 1929" took nearly 4 years to reach bottom.  See chart below. 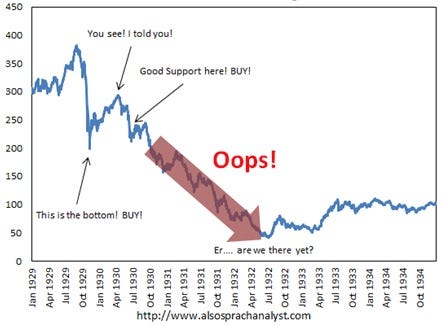 Our second way to find a bottom is to look at "market value" and see what a fair value would be.  One estimate of market value is the Shiller CAPE Index.  Dr. Robert Shiller of Yale University won the 2013 Nobel Prize in Economics for his work in 'Asset Valuation'.

The stock market is one asset his valuations are most famous for (housing is another).  The Shiller Cyclically Adjusted Price Earnings (CAPE) Ratio simply takes the price of an equity or index and divides it by the 10-year average annual earnings of the stock or index.

The 10-year span of earnings smooths out the almost random year-to-year cyclical fluctuations.  Annual earnings may significantly decline in the next year but the 10-year average will not move that much so this is a reasonable measuring stick.  The next chart shows the CAPE Ratio going back to the 1870s.  Note that it indicates extraordinary overvaluation in 2018, higher than "Black Tuesday" in 1929:

The Shiller CAPE ratio is currently at 23.5 but the median over the last 150 years is 15.8.  For the ratio to get to its' historic median it would need to drop about 33% from current levels.  Further, the CAPE ratio overshoots both ways.  In 2000 it overshot to the high side to hit 44, and in 1982 it overshot to the low at around 7 - see above chart. 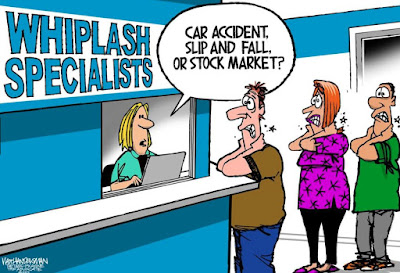 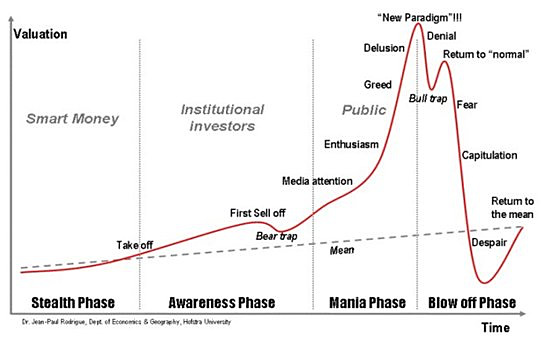 While higher than 1500, S&P-500 = 1669 is close enough that 1500 isn't unreasonable, especially when we consider the various times when it has gone below the median value and stayed there for extended periods.

If you add up the value of all the shares in the stock market you get what is called the "Total Market Capitalization" (TMC).  Warren Buffett popularized a way of determining if the broader stock market is over- or under-valued using the TMC of all stocks divided by the GDP (Gross Domestic Product = all goods and services in the US economy).

The chart below shows GDP in green, Total Market Cap in blue.  When the TMC is above the GDP the stock market is expensive by Buffet's criterion.
The next graph shows the TMC/GDP Ratio, which is what we are really interested in.  In the graph below, "Fair Value" is marked between the red 90% line and the blue 75% line.  Note that since the early 1970's we've had a "fairly valued" market only in passing.

The market has been mostly undervalued or overvalued according to Buffett's indicator.  Please note that by this criterion, the market was extraordinarily overvalued in January 2020 at 150%, even more overvalued than the 140% reached in the Dot-Com Bubble of 2000.  We saw similar overvaluation in the previous Shiller chart as well.  This is why we say the current market drop was an avalanche waiting to happen.

Also worth noting is that the Buffett ratio stayed well below "Fair Value" from March, 1973 to September, 1995 - more than 22 years!  There is no guarantee of a swift rebound.

Again the numbers we are getting are diverse but indicate that the S&P-500 at 1500 is not unrealistic.

This is a pretty easy-to-understand measure of stock market valuations.  Divide the price of the stock or index by the sales per share.  More on this method here:
https://www.investopedia.com/terms/p/price-to-salesratio.asp. 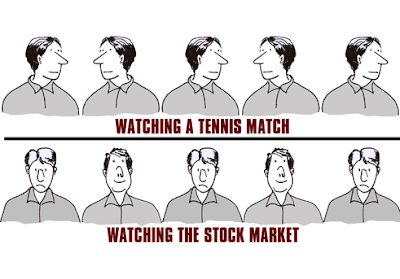 This only looks at the "price" part of the ratio - the numerator.  It assumes the "sales" part - the divisor - stays constant.  It is far more likely that sales will decline as well, and the S&P value of 2167 value will be excessively optimistic.
In any event, S&P-500 at 1500 is distinctly possible.
5.  EV to EBITDA Ratio

This metric is a variation of the popular P/E (Price/Earnings) ratio.  Instead of price it uses Enterprise Value (EV).  Enterprise value is the market capitalization minus debt.  Instead of earnings it uses the Earnings, Before, Interest, Taxes, Depreciation, and Amortization (EBITDA - sometimes shortened to EBIT).  More at:
https://www.investopedia.com/ask/answers/072715/what-considered-healthy-evebitda.asp

Reported earnings can be manipulated by companies to show greater or less earnings while EBITDA comes before any manipulation.  More on EBITDA here:
https://www.investopedia.com/ask/answers/072915/how-can-evebitda-be-used-conjunction-pe-ratio.asp

The next chart shows the EV/EBITDA ratio (in red) tracks very closely with the Price-Sales ratio (in blue) and by the end of 2019 was similarly out of whack.  Since EV/EBIT and Price/Sales are so similar we mention it as yet another indicator confirming our previous estimates of where a bottom to the current crash might be.

We will spare you (and ourselves) the pain of going through another set of calculations.  We just point out that here is yet another widely accepted indicator showing the S&P-500 was seriously overvalued in 2019 - a crash waiting to happen.

Yet again, we see that S&P-500 at 1500 (or the Dow around 14,000) would be perfectly in line with standard metrics and historical precedent.

Nothing is certain, especially with the CoVid-19 virus mutating, potential vaccines, and other unknowns affecting things.  It does seem that the market was unusually over-valued in 2018-2019 and was overdue for a "correction".  That "correction" seems to have a while to go both in time and distance.

Posted by Michael Goldman at 9:41 AM