The Sunnyvale Civic Center plan options were presented to the City Council on September 12, 2017.  There are two phases.  The first phase tears down all the existing City Hall buildings and builds a new one while adding an extension onto the Public Safety Building.  Phase two tears down the remaining buildings, adds a parking garage, and rebuilds the library and Public Safety building.

Plans are available in PDF form at:

Here are the key points from that document:

There are two options to be decided upon.

Option 1 in it's final phase puts all the new buildings in the north side of the campus.  In the diagram below, El Camino is on the bottom of the drawing, Mathilda is on the right. 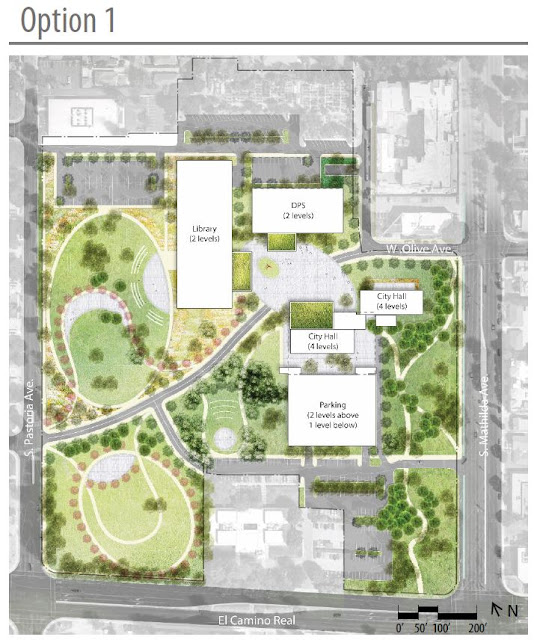 One very common comment about option 1 is that it pretty much invites a future city council to sell or long-term lease away 60% of the Civic Center the next time there seems to be a "need" for money as per the 2012 plan from city planning staff shown below (figure is rotated so Mathilda is on the bottom, El Camino is on the left, and Pastoria is at the top): 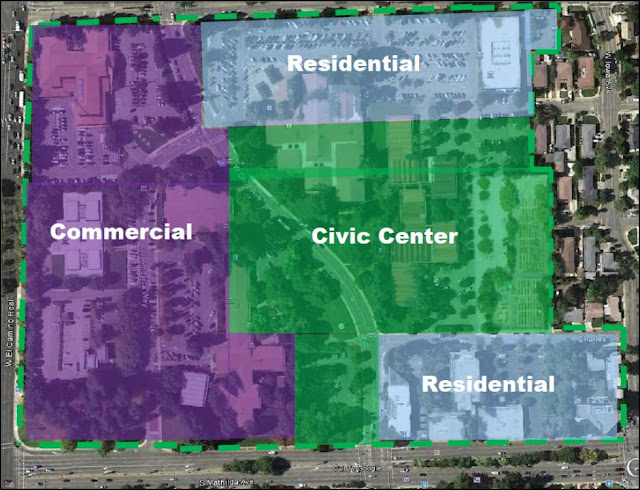 In the above diagram, the blue area listed as "commercial" was to be "99-year leased" to a developer who would put up 6 or 7 story office buildings.  In return for which, the developer would build a new library.  The upper blue box labeled "residential" was to be a 4-story apartment building.

Option two in its final phase puts a parking garage for all buildings in the southwest corner, eliminates Olive Ave. and puts city hall on the East side (near Mathilda) and the Library on the West side near Pastoria.  There will be underground parking under both the library and the City Hall.  The Public safety building will be in the South-center of the campus. 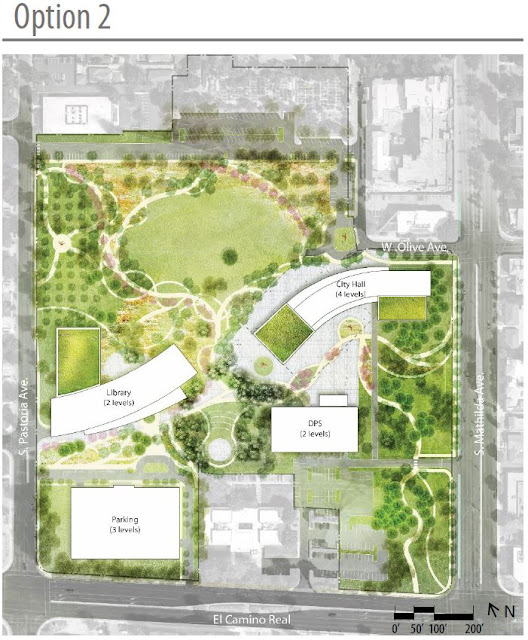 Many people have expressed surprise that:
a) the parking garage would be on El Camino and,
b) Olive Ave. will be removed.

In re: placement of the parking garage:

In the opinion of many, parking garages are typically ugly so why put that on El Camino where everyone can see it?  A new library presumably would be a beautiful "iconic" building which would be hidden behind a garage.  Also, the garage is suppose to serve all three civic center buildings yet is furthest away.

Why not put the garage in the center where everyone can access it equally well?  The answer given by city staff has been that it is because of "sequencing" - that is you want to put up a new building before you demolish the old one so the parking garage could go up after the new Department of Public Safety (DPS) building has been finished.

That doesn't make sense to some people since you could just as easily place the garage in the center after the old DPS building has been demolished.  The library could then be put closer to El Camino where it would serve as a very visible welcome to the Civic Center.

Some have suggested that the reason to put the parking garage on El Camino is that it would be cheaper for a developer to acquire (lease or purchase) the El Camino side of the Civic Center if they only had to replace a parking garage than a complete new library.  There is also the psychological impact of tearing down a new library (opened, we can presume, with much ceremony).


Much easier for a future developer to tear down a parking garage.  Hence the garage goes where it won't be missed should a future Sunnyvale City Council decide to sell or lease away the El Camino part of the Civic Center.

This is also a surprise and the argument is that it is because of sequencing.  If the old DPS building is still up when the new library is built, there isn't enough room to retain Olive Ave.  This is also easy to work around.  Put up the new DPS building before you put up the library.

So the sequence could be new City Hall, parking garage, new DPS building, new library.  Then you could retain Olive Ave., if the community likes having that.