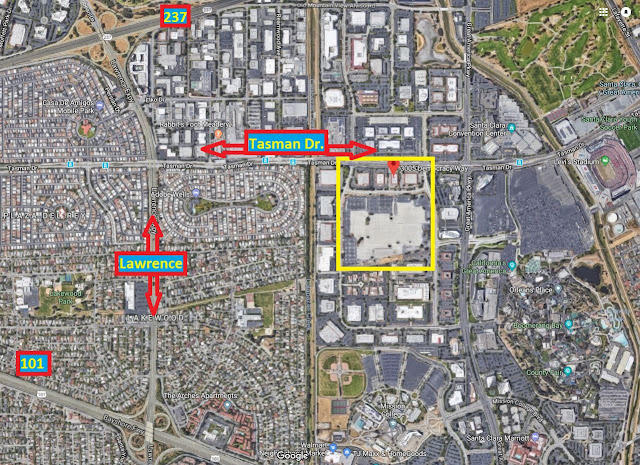 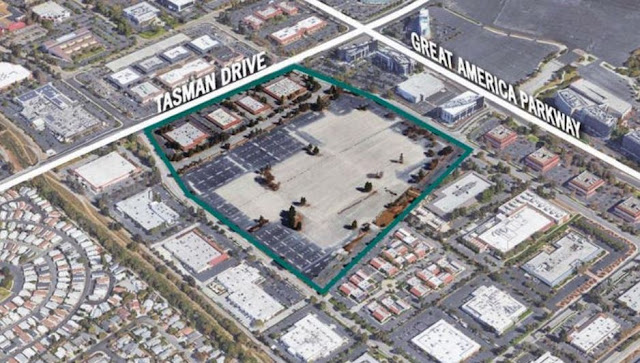 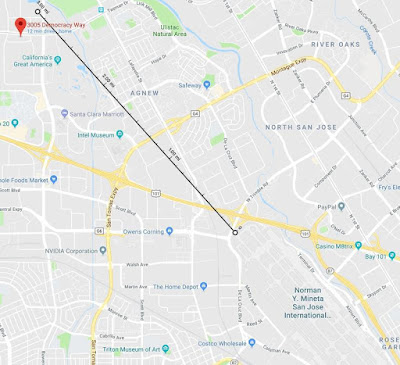 Commute Distance in US Metro Areas

In the San Francisco Bay area, when the subject turns to traffic, you always hear someone say "I know someone who commutes from Livermore!" 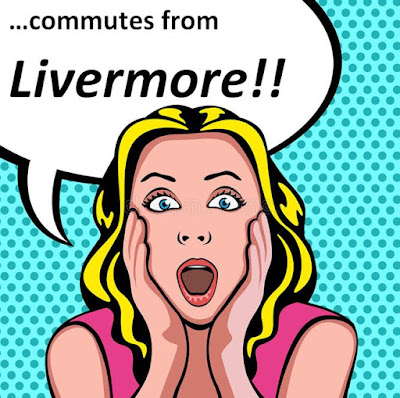 
This is part one of a series on commuting.  This part focuses on commute distances.  Part two looks at commute times.  Link to that post is:  https://meetingthetwain.blogspot.com/2018/07/commute-times.html

Livermore is at the end of the earth so if anyone at all is commuting from Livermore it means there is a "crisis" of some sort and we should all start panicking and seek immediate action, now, Now, NOW!

Where the heck is Livermore?
Google maps to the rescue!
I was looking into the reasons why San Francisco has such extreme commutes when I found, to my surprise, that it (mostly) doesn't (maybe a little, but not really huge).  I guess I fell for that "..from Livermore!" urgency like many others.  I expected to find that other metro areas have far fewer people making long commutes and found instead that other areas are (literally) 'all over the map'.

I looked at the commutes for the 20 largest metro areas and 6 others that are growing really fast.  The data set includes 44 million workers.  Including non-workers (kids, seniors, etc.) this is over 100 million residents.  I always included the main centers of employment and I only looked at how many commuted in, regardless of where they lived.

The averages for the 26 US metro areas are shown below: (click graph to enlarge)
I used the US Census visualization tool "OnTheMap" to show the distribution of commute distances and locations.  One of the reports it generates shows the numbers and percentages of workers in each category as seen in the right half of the sample output (for Contra Costa County, CA) below: 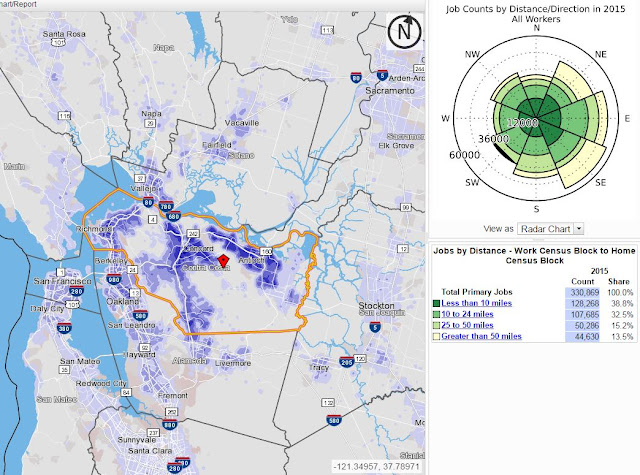 More on how to use the tool here: http://meetingthetwain.blogspot.com/2016/12/how-to-use-onthemap.html

Below is the summary graph for 21 of those metro areas.  They are sorted by what percentage in each metro area fall into "commute less than 10 miles" ("< 10").  I have highlighted San Francisco, Los Angeles, and the entire 9-county SF Bay Area (including San Francisco) with arrows and special 'bars' so you can see to what extent they differ from other metro areas and from the 26 city averages.  What is clear is that they aren't much different from the others. (click on graph to enlarge)


21 Metro Areas
Percentage of Each Metro Area by Commute Distance 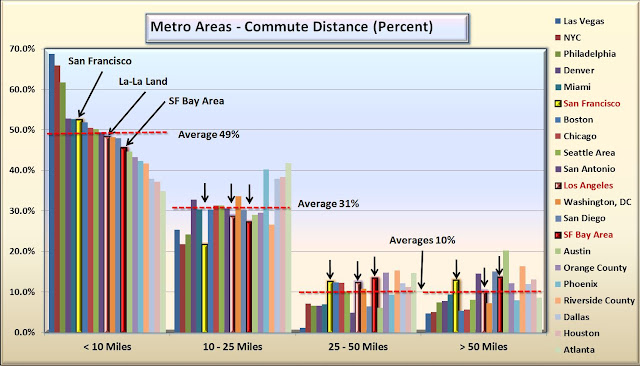 One big surprise.  Notice where LA (pink bar) is in the four categories.  The city most famous for bad traffic seems to be about as close to average as one could reasonably expect.

(NOTE:  This refers to distance traveled.  Congestion is a separate issue to be covered elsewhere)

The second surprise was that I could see no numerical pattern at all.  I expected to see some correlation with population.  We saw in an earlier post that as the SF Bay Metro area grew it's commute boundaries expanded.  We saw a significant increase in long commutes over time as population increased.  That exploration is here: http://meetingthetwain.blogspot.com/2018/03/sf-bay-area-2-live-work-commute.html  The graph for that is reproduced below: 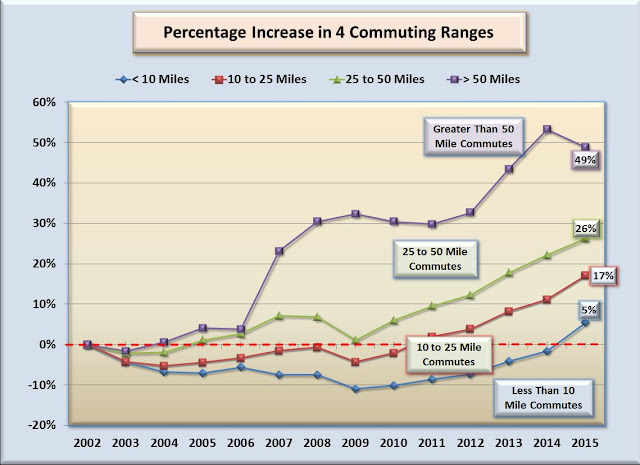 Given this data I supposed that there would be a correlation between metro area population and commute times.  If so, it doesn't show in this data.  I calculated statistical "correlation coefficients" for population vs. each of the four commute categories.  No coefficient was greater than 0.29 and two were essentially zero.  Any correlation below 0.6 is too low to be meaningful.

In other words, each metro area's four commute-distance categories are not related to population but to local factors of culture, geography, and economics. 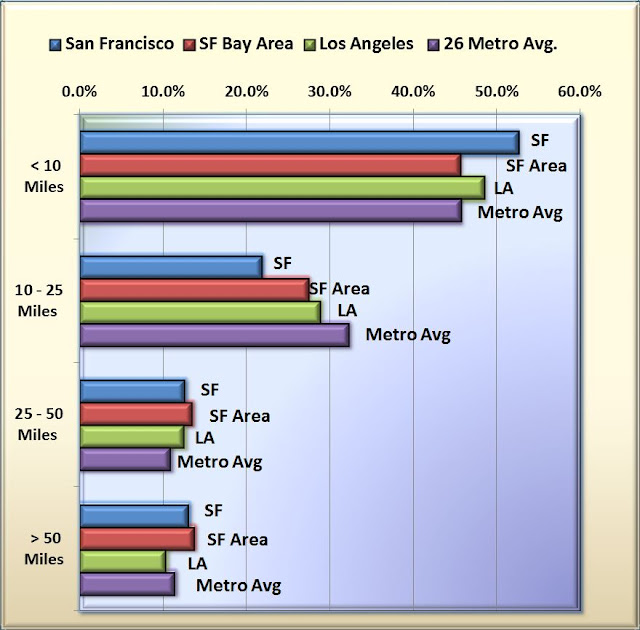 We can see this by looking at total Vehicle Miles Traveled per person below (click chart to enlarge): 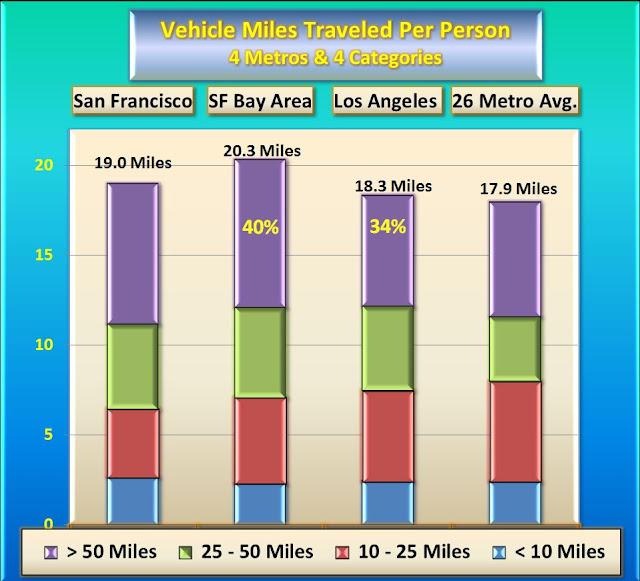 The 50-mile circle encompasses a lot of land, a fair bit of water, and quite a few mountains.  The mountains are protected from development in many cases and serve as a barrier to commuting, though there are roads through those lands.  The key point to recall is that there are substantial amounts of flat, easily-built-on land near employment centers.

Now the SF Bay Area:
The difference is obvious.  A LOT more ocean than LA, that big bay in the middle, and many more (mostly protected) mountains than in LA - and those mountains are closer to employment centers.  Within that circle, there is some flat, easily-built-on land in San Jose and just over the East Bay hills around Pleasanton.  The big flat lands to the east are mostly outside the 50 mile circle.  Competition for land close to employment centers is more intense because there is less land to compete for.  This drives up the price of land and the housing built on it.

In short, less buildable land within 50 miles of employment centers = more super-commuters in the SF Bay area than in LA.  As the earlier bar graph with those 21 cities showed, there are other metro areas with even more super-commuters - San Antonio, San Diego, Austin, Riverside County, and Houston.  Still, the SF Bay Area is above average - mainly due to geography.

Summary:  So now you know.  The next time you hear "...commutes from Livermore!" 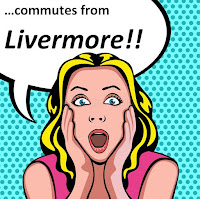 the proper response is a shrug and maybe a casual reply indicating your worldly sophistication such as... 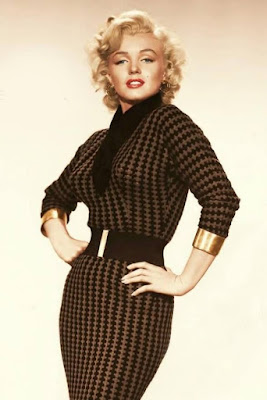 Posted by Michael Goldman at 10:03 PM