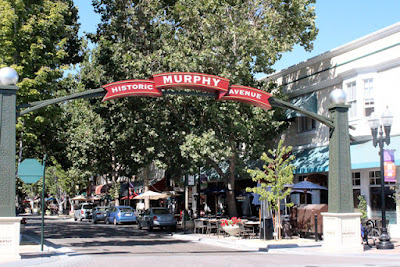 Other posts in the series:

Urban Sprawl: One of the hottest topics in the SF Bay Area is the housing-commute issue.  Traffic is getting worse, the schools are said to be overcrowded.  Some say we need to stop any further development.  Rents and house prices are very high.  Many argue we need to build more housing to keep rents from exploding and to accommodate those wanting to work in Sunnyvale.  To add to the mix, concern about global warming causes others to urge us to develop more housing in Sunnyvale so more people can walk or bike to work instead of using cars.

The US Census Bureau has a marvelous tool at http://OnTheMap.ces.Census.gov/ from which the following information comes.  I wrote up a short intro on how to use it available here: http://meetingthetwain.blogspot.com/2016/12/how-to-use-onthemap.html

"Urban sprawl" is a term some like to use as a pejorative description of suburbs expanding out of a city center.  Not every urban economist agrees that "Urban Sprawl" is bad or even that it is unavoidable.  For now, we'll assume that it is not good and save for later a discussion of the merits and trade-offs of urban sprawl.

This census data suggests current policies are worsening urban sprawl and making it less likely workers can walk or bike to work.

The trend is not huge but it is clear and opposite to that promised by the "walkable city" crowd - the mantra was "more housing so people can work and live in Sunnyvale".  The housing was built, more jobs happened, and now fewer work where they live.

The Jobs / Resident ratio indicates how equitable a city's housing and jobs situation is.  If it is high (many more jobs than residents) it might indicate the city is hogging all the jobs (and tax revenue from that commercial business) and letting other cities bear the expense of providing services for residents - much more expensive than providing services for businesses.  Some cities like Saratoga and Los Altos prefer to be almost exclusively residential, but most cities want as much tax revenue as they can get from business and commercial.

Year 2014 (latest data):  The first census data map shows how many commute IN to Sunnyvale, commute OUT of Sunnyvale, and live AND work in Sunnyvale.  We see that in 2014 (click on image to enlarge it) ... 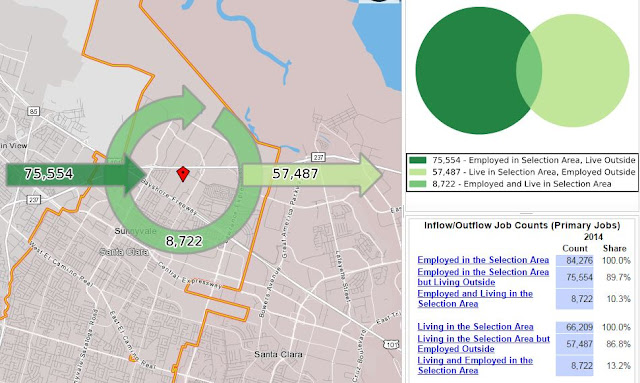 There are about 84,000 jobs in Sunnyvale but only 66,000 workers or 18,000 more jobs than workers.  Is this a problem?  The vast majority of those who work here already commute out.  More housing would clearly worsen school crowding (at least short term) and traffic would hardly decrease under current policies. Would more housing just bring in more residents who commute to jobs outside Sunnyvale?  Let's look at the change over the last 12 years. 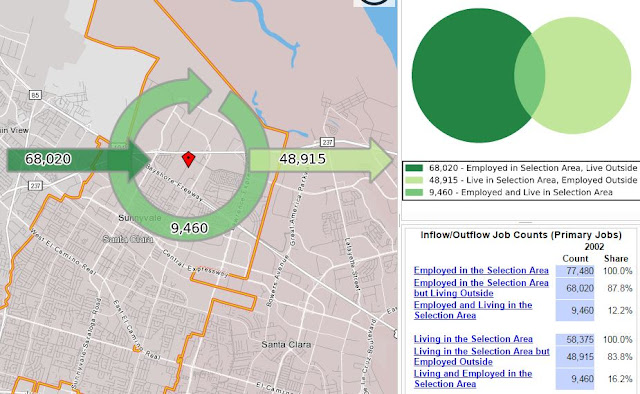 We see that in 2002:
Things Worsen:  In terms of "walkable/bike-able neighborhoods", things got worse all around from 2002 to 2014.  More commute in, more commute out, more overcrowding in schools and fewer live and work in Sunnyvale.  All counter to the narrative of  "we need more housing in Sunnyvale so people can walk/bike to work." 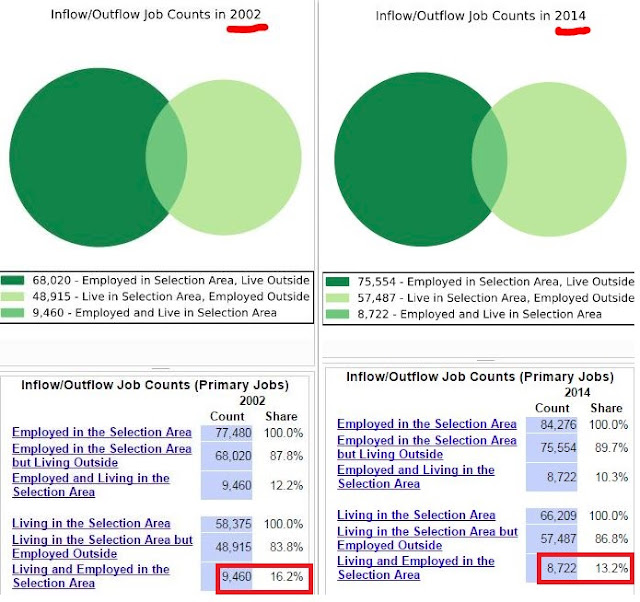 During that time, the number of those employed and working in Sunnyvale has gone down, not just in percentage terms but in actual numbers.  It would seem we are creating more jobs for residents of other cities while our own residents go elsewhere to a greater extent than before.

Let's look at the details (click image below to enlarge): 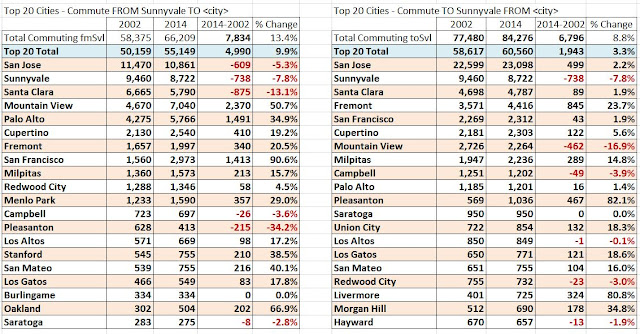 Commuting TO Sunnyvale:
The table above on the right shows where workers in Sunnyvale commuted FROM.  It also shows where the growth in those commuters came from over the 13 years from 2002 to 2014.

Conclusion 1: looking at where Sunnyvale workers are commuting FROM, we see most of the growth in commuters is coming from further out.   This may be because Sunnyvale is too expensive for those seeking a nice little house with a back yard.

The table above on the left shows where residents of Sunnyvale commuted TO.  It also shows in the right-most column of the table what the increase or decrease was in the 13 years from 2002 to 2014.

Conclusion 2: looking at where Sunnyvale residents are commuting TO, we see a certain amount of randomness, but most of the growth is commuting to cities that are more expensive places to live.  Sunnyvale is providing cheaper housing for more expensive job centers.

Conclusion 3:  putting together conclusions 1 & 2, it appears that as far as job growth is concerned, the high paying job centers are using Sunnyvale as a large "dormitory", forcing those who work here to commute from further and further away.  Examining this in detail below...

Longer Commutes for Sunnyvale Workers: For those who commute TO Sunnyvale the big increases in percentage are Fremont (24%), Pleasanton (82%), Livermore (81%), and Morgan Hill (35%).  Those four account for an increase in commuters TO Sunnyvale of 1,814.  That accounts for over 93% of the "top 20 cities" contribution to the increase in commuters to Sunnyvale.  These places are all cheaper than Sunnyvale suggesting that building more housing has done nothing to stop people from driving further and further to get affordable housing.  Affordable housing includes affordable single family housing.  Some people will travel as far as necessary to get a 3-4 bedroom detached home with a back yard for family and a front yard for a sense of space and greenery.

Perhaps we are being too narrow.  People can walk and bike to nearby communities such as Mountain View, Santa Clara, etc.  We'll call this set of cities adjoining Sunnyvale "Greater Sunnyvale".  The following two graphs from the Census' "OnTheMap" show the overall view of this metropolis first for 2002 and then for 2014:

Now let's keep a focus on "Greater Sunnyvale" but narrow our attention to Sunnyvale.  How many commuters both "into" and "out from" Sunnyvale commute wholly within this hypothetical "Greater Sunnyvale"?  The census data in a spreadsheet shows what happened in the 12 years from 2002 to 2014 (click image to enlarge):

It would appear that we are doing nothing to improve the bike-ability of commutes for Sunnyvale or nearby communities.  Urban sprawl appears to be increasing since a greater percentage of people living in "Greater Sunnyvale" go further outside that hypothetical metro area.

Could the increased demand for land be raising the cost of land resulting in increasing rents and home prices?  If so, could this be driving people further and further away to find the small town, affordable place Sunnyvale used to be?  Another topic for another day.

These trends of sprawl aren't huge but they are clearly in the opposite direction to that which some have long argued would happen.  The argument was that with more housing and more jobs more people would choose to work close to home.  Thirteen years of data show it not only hasn't happened, but the trend is going in the opposite direction.  Maybe we haven't added enough housing and jobs.  Maybe we've added too many.  There are doubtless many other ways to look at even more data, but this will suffice for now.

Showing Data:
Below is the original census data for Sunnyvale for 2002 and 2014 (click on image to enlarge): 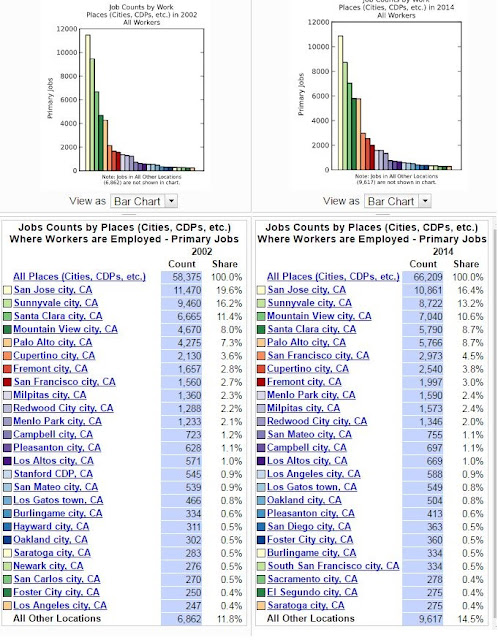 Posted by Michael Goldman at 2:09 PM