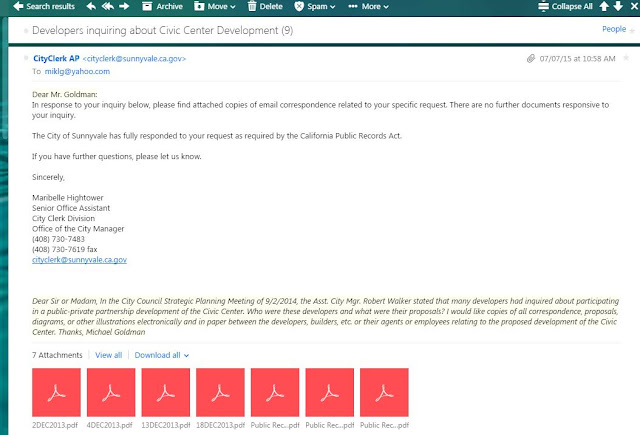 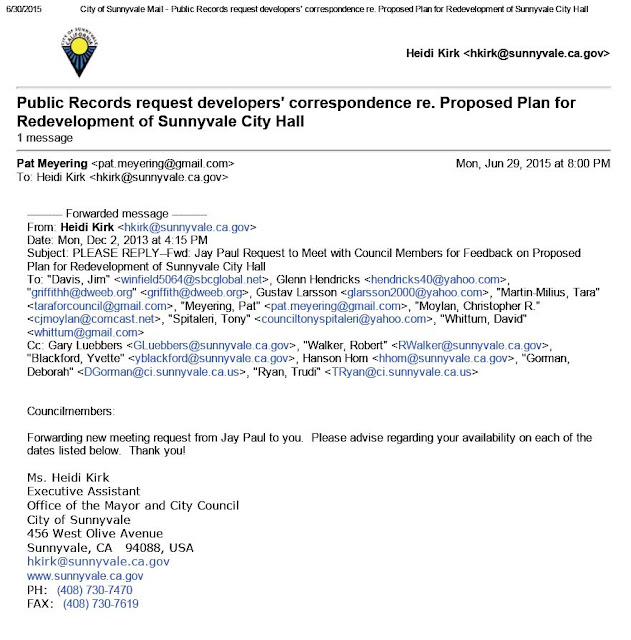 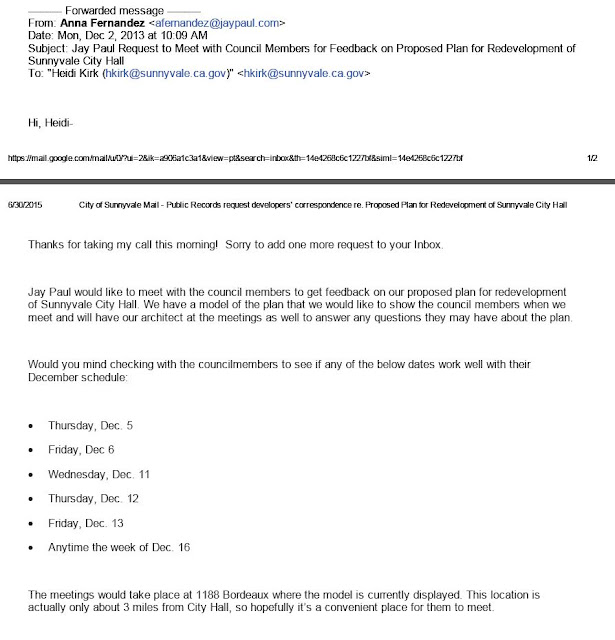 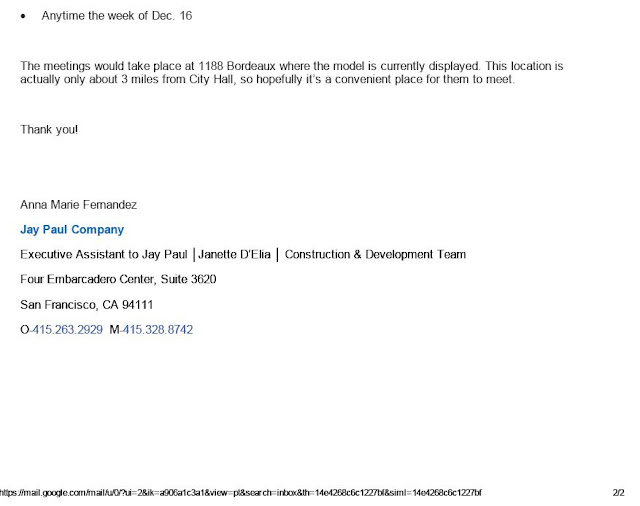 Measure M does nothing to change the ability of big moneyed interests to initiate or support ballot measures to take over city lands.  They can do it now without Measure M.  The reason they don't is that it is much easier and cheaper to finance the campaigns of select City Council candidates once every four years than to initiate very expensive ballot initiatives that might fail.

If the Council Members owe their position to the money provided by out-of-town and out-of-state developers, there is no need to initiate costly and problematic initiatives.  I'm not saying council members "are bought and paid for" but if candidates receive money from billionaire developers from places like South Carolina and Georgia it is because the developers expect a council favorable to their interests.
Anyone can look at contributions.  Just go to the Sunnyvale City candidate financial filing web site:
http://nf4.netfile.com/pub2/Default.aspx?aid=COS as seen below:

scroll down to the bottom and with a few clicks look at who contributes to whom and how much. 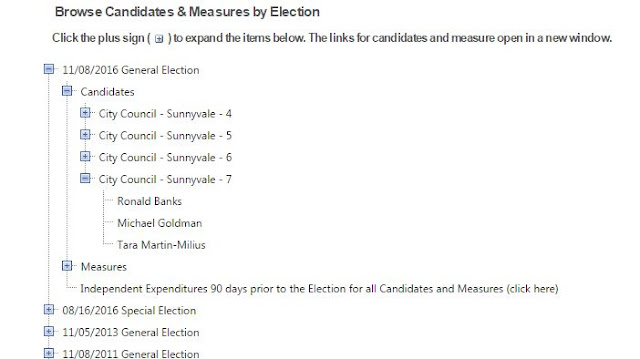 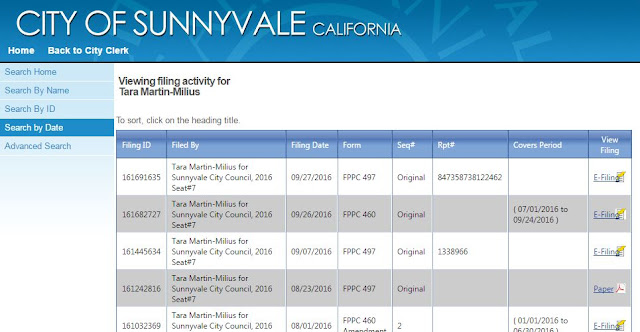 you see $1,000 from Greystar development in South Carolina.

They are a very large property developer and manager.  In 2011 they were the largest property owner-manager in the US with over 187,000 units.
https://www.multihousingnews.com/post/profile-greystar-real-estate-partners-llc/ 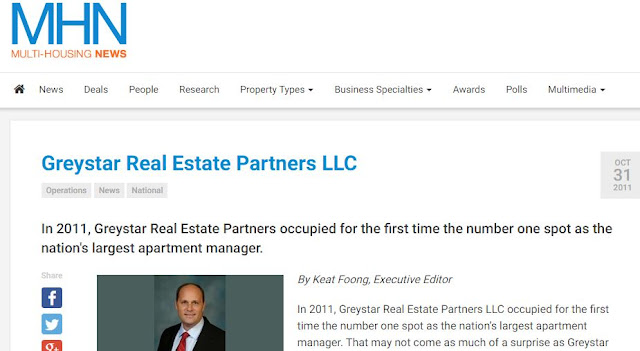 They have 37 ratings on "Yelp" with an average rating of 1 star.  I've never seen a business get such a low rating.

Why would a South Carolina company contribute to a Sunnyvale candidate?  Because they were asked to contribute.  It is not a spontaneous action.  And what would a real estate developer be looking for in a candidate with a 4+ year voting record?  Consistently voting in the interests of developers perhaps?

Looking at the various contributions on forms 460 you find even more developers giving large amounts.  For 6/30 you find another billionaire developer - Marcus - based in Palo Alto.

According to Forbes Marcus is worth about $1Billion. 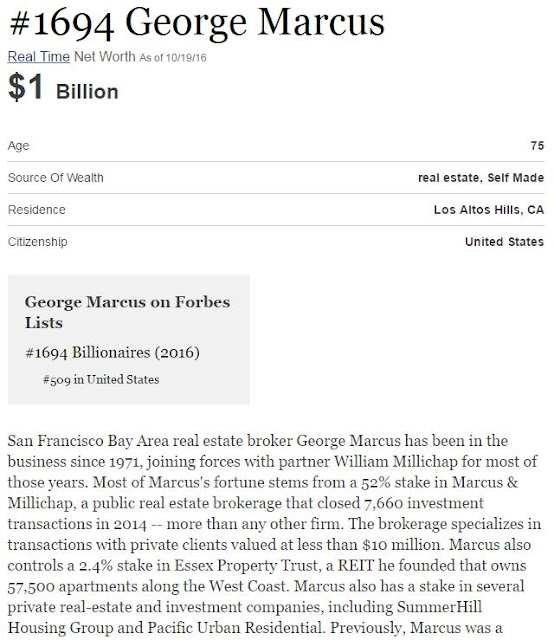 He has his own Wikipedia entry showing his co. turned over $34 Billion in property in 2014 and was investigated by the NY State under the Federal Racketeer Influenced and Corrupt Organizations Act (RICO).  Those cases were eventually dismissed.  The firm tried to ruin a competing broker by suing him but their case was thrown out by a judge.  They "regret" having initiated the lawsuit.

Marcus also contributed to Russ Melton.  Marcus contributed over $403,000 to various candidates and organizations around the state, including such organizations such as the League of Conservation Voters.  These organizations endorse the candidates he supports.  Below is from:
http://cal-access.sos.ca.gov/Campaign/Committees/Detail.aspx?id=1222033 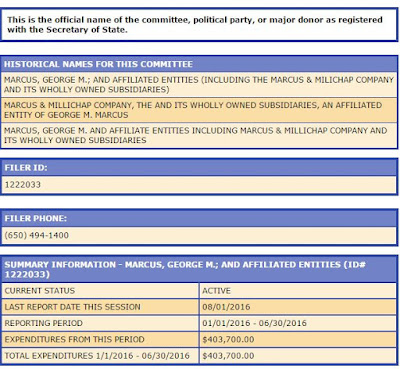 In fact, a lot of realty based organizations from around the country contributed to a number of candidates.  One might think that if Marcus, Greystar and other large real estate investors support Sunnyvale politicians, it is because they expect a return on their investment.  These real estate investors are businesses.  They are interested in profit.  They invest in politicians like they invest in land.
Measure M puts a partial check on this.  It would be better to get the money out of politics entirely with publicly financed elections - which the CA legislature just authorized http://www.sacbee.com/news/politics-government/capitol-alert/article99167697.html - but until then we can at least safeguard our parks, golf courses, Civic Center and other green open spaces.

Posted by Michael Goldman at 6:23 PM