San Francisco Density vs US Cities

A Tale of 8 Cities
Comparing Densities
Introduction:
What would San Francisco's population and density be if it had absorbed neighboring towns and counties as New York and other cities did?
To answer this question, we create several hypothetical Greater San Francisco's by "adding in" adjacent cities.  We compare these Greater San Francisco's to Boston, Washington, Seattle, Chicago, NYC, LA, and Houston.
Link to this post for sharing:
https://meetingthetwain.blogspot.com/2020/05/san-francisco-density-vs-us-cities.html
Motivation:
In the endless debates about density and the cost of housing in California (and particularly San Francisco), I realized that some people (a lot, actually) were comparing San Francisco proper (47 sq. miles land area) with other cities like NYC (302 sq. miles) or Houston (638 sq. miles). 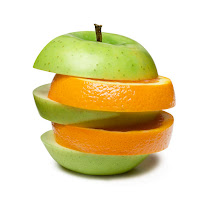 These are clearly "apples to oranges" comparisons.  Maybe we can move the discussions to a higher plane if we show what "apples to apples" would look like.  Maybe not.
Part of the reason for doing this is that I got tired of hearing people say that housing somewhere else, like Atlanta, or Houston, is cheaper than San Francisco.
While literally true, all the cities that are cheaper than San Francisco have a much bigger land area.  If you lived in Houston or any of these other cities, one reason you could afford to live within the city limits is that they are so geographically huge.  You can get the same effect in the SF Bay area by moving to cheaper towns such as Antioch which might actually be closer to work than if you were within the city limits of, say Houston. 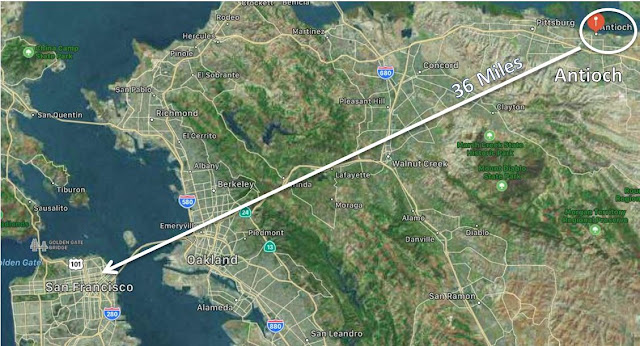 36 Miles from Antioch to San Francisco 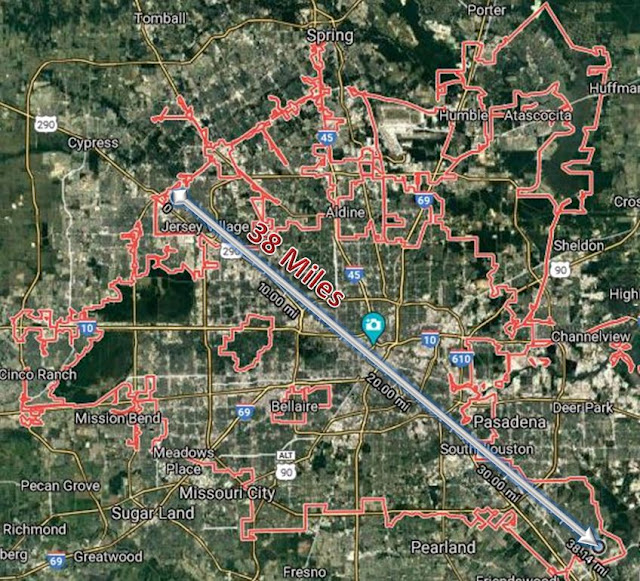 38 Miles from one side of Houston to another.
You would need to commute, of course, but everyone commutes everywhere.  Most people don't mind it, some hate it, but whether in the San Francisco Bay Area or Houston, or NYC, everyone commutes roughly the same - both in miles and time.  That is discussed in two other explorations:
Commute distances:
https://meetingthetwain.blogspot.com/2018/06/commute-distance-in-us-metro-areas.html
Commute times:
https://meetingthetwain.blogspot.com/2018/07/commute-times.html 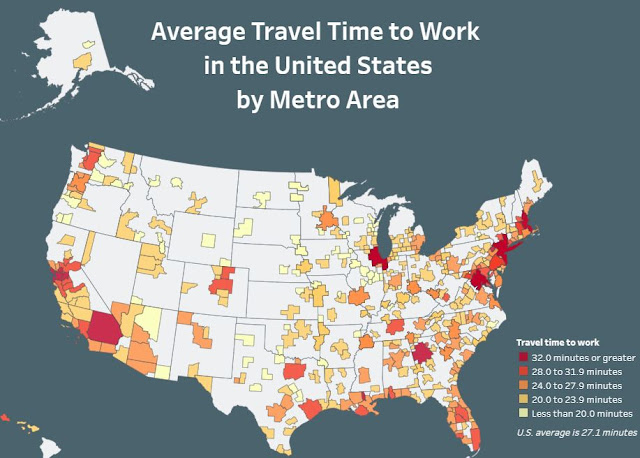 US Census Travel Time to Work
Darker colors = longer commutes
Average is 27 minutes
https://www.census.gov/library/visualizations/interactive/work-travel-time.html
-------------------------
Another motivation for this post is that I got really tired of hearing that people are moving from rural areas to cities.  The implication is that the new generation has given up the American Dream of a Single Family Home (SFH) for the density of a big city with its high-rise apartments, busses, and subways (i.e., NYC).
It is true that US Census-defined Metropolitan Statistical Areas are growing faster than more rural areas.  Places like Phoenix, Austin, and Houston are growing the fastest but they are not at all dense by most people's definition.  Austin has almost one million people within its borders, but the density at around 3,000/sq. mile is less than one-sixth that of San Francisco.

Downtown Phoenix (pop. 1.7M) - Downtown Los Altos, CA (pop. 30,000)
Los Altos (4,720/sq.mi.) is 50% denser than Phoenix (3,120/sq.mi.)
(Phoenix's tall buildings are mostly offices.)
We see that most people live in cities that are not very dense.  If you compare the entire San Francisco Bay Area and with other large cities, San Francisco is about as dense as the others and more dense than towns most people live in.
San Francisco density in 3D.
Click image to enlarge 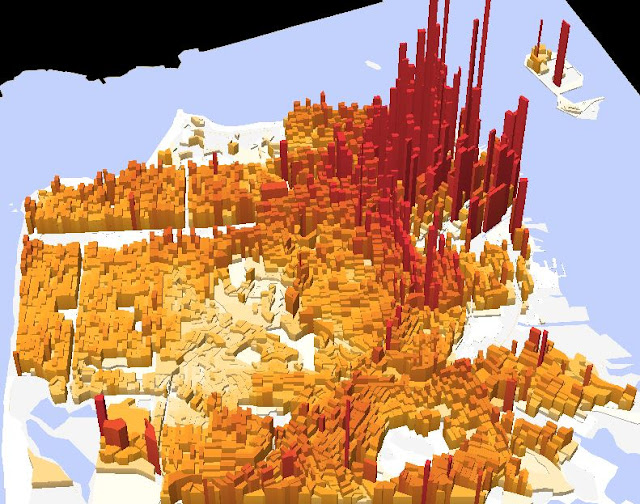 San Francisco is the US's smallest major city (47 sq. mi.) the 2nd densest (after NYC).
Interactive Map from: https://www.homearea.com/featured/3d-population-density/#0667000
The big exception of course is New York City.   But NYC is a one-of-a-kind.  It is so much denser than any other US city that it is "the exception that proves the rule".  You can see that in the next graph showing the density and population of the 10 most populous cities in the US - the only cities in the US with over one million residents.
What the bar graph shows is that NYC proper is very much more populous than any other city and much, much more densely populated - by far!  The average density of these 10 cities is 8,432 residents per square mile while NYC is well over three times that density at 28,317/sq. mi.  NYC pulls the average density up so high only two other cities are above average.
(click image to enlarge) 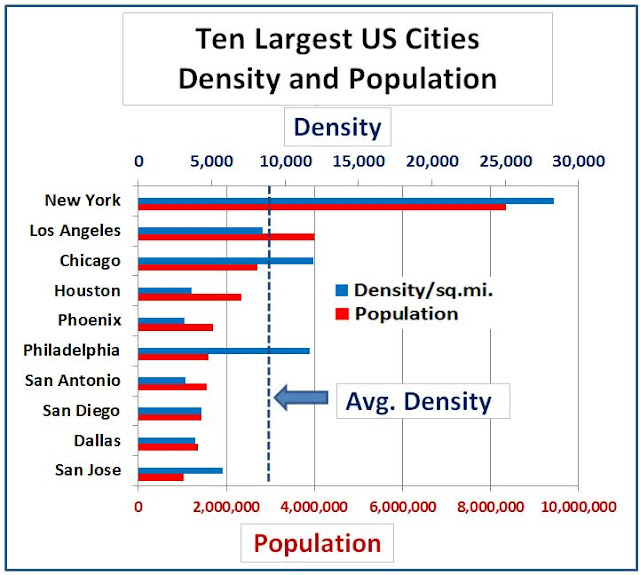 One thing I hope readers will get out of this is that density is "not what you think it is."  Most people live in areas that look like "the suburbs" with a population density around 3,500 people per square mile.  Whether their city has a population of a million or 100,000 people in it, most residents live in a low key suburban-looking neighborhood. 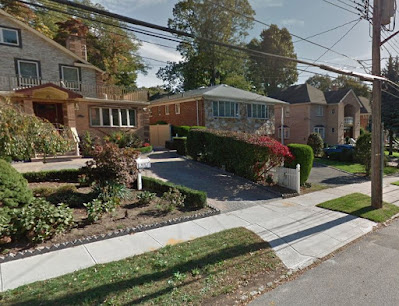 "Suburban" 86 Palo Alto Ave., Queens, NYC
Not only do people live in not-dense areas, those not-dense areas are growing far faster than the denser metropolitan areas. That is examined in depth here:
https://meetingthetwain.blogspot.com/2018/10/on-move-1.html
The data we get here is summarized in the bar graph below.  This shows that if San Francisco absorbed enough adjoining cities to have the same land area ("Blue Bar"), it would be denser than Boston, Washington, DC, Seattle, and much denser than Houston.  It would be less dense than Chicago or Los Angeles and much less dense than NYC - but then every American city is much less dense than NYC. 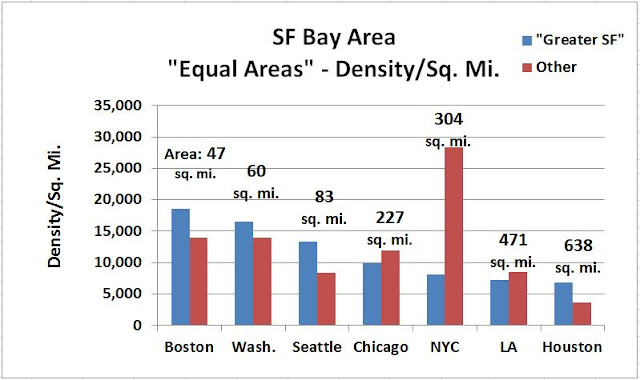 The density of "Greater San Francisco" is the Blue Bar.
The density of the other city is the Red Bar.
The Areas in Sq. Miles are the same.
Furthermore, we can see in the bar graph that as we increase the land area of "Greater San Francisco" from the size of Boston (48 sq. miles) to the size of Houston (638 sq. miles) the density of this expanding Greater San Francisco decreases as the area expands.
Oakland would not become any more dense if it were suddenly absorbed into a "Greater San Francisco".  It would be the same Oakland, with the same housing and business.  The average density of this hypothetical "Greater San Francisco" would be less because of the addition of less dense Oakland, and Fremont, etc., etc.
This illustrates a basic tenet of "Urban Economics" - namely, that as one moves out from the center of economic activity, the cost of land decreases and therefore density goes down (because people can afford to occupy more land).  We discuss this in more detail here:
https://meetingthetwain.blogspot.com/2017/04/urban-economics.html
Summary:
We see that the high density of San Francisco is really due to it being a small compact area with little room to grow geographically.  If it had been able to expand by absorbing neighboring communities as other cities did, it would have ended up looking like other cities - a dense central core with population density diminishing as one goes further from that core.  See 3D map below:
3D Density Map of San Francisco, Oakland, Berkeley.
Click on image to enlarge: 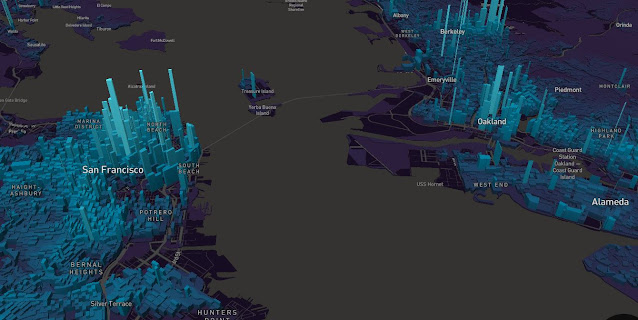 3D Map from: https://labs.mapbox.com/bites/00273/
Source:
We draw on a US Census Bureau data of the 317 cities in the US with populations over 100,000 as of July 1, 2019.  The data is summarized in a Wikipedia article that includes population, land area, and density.  Cf: https://en.wikipedia.org/wiki/List_of_United_States_cities_by_population).
The average population density of these 317 cities with 95,000,000 residents is 3,238 people per sq. mile (total population divided by total land area).  This equals the density of San Antonio, TX, and is slightly less dense than Chico, CA, or Tampa FL.
---------------------------------
Analysis:
We look at each city and see which towns San Francisco needs to add to be the same geographical area.
Boston, MA (48 sq. miles), along with San Francisco, is one of the smallest of America's large cities.

The table for this is: 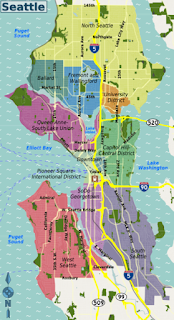 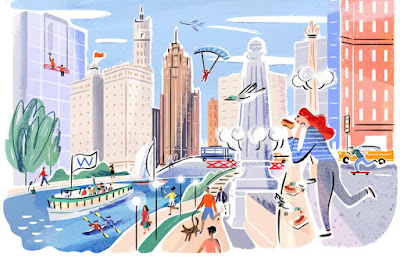 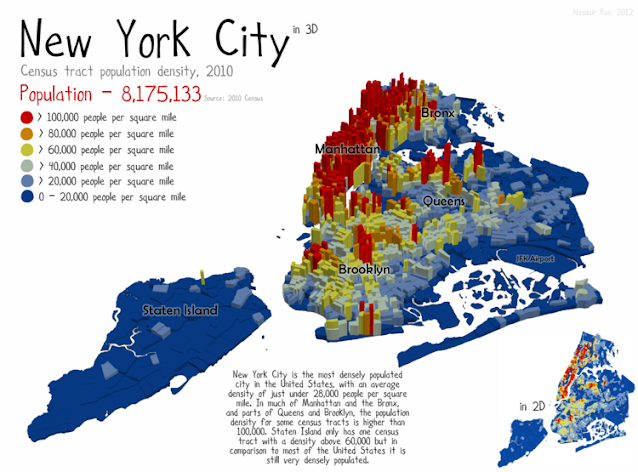 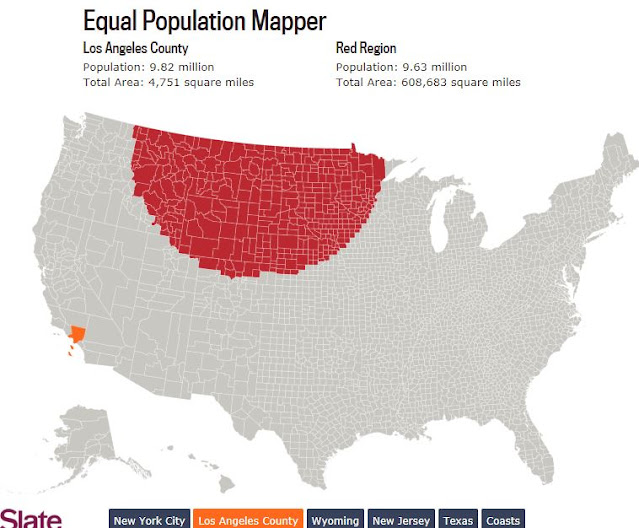 LA County vs an equivalent population in "Big Sky" country
Interactive Map (fun to play with!) from:
http://www.slate.com/articles/life/culturebox/2014/10/population_map_use_our_interactive_map_to_figure_out_how_many_flyover_states.html
To get 165 more sq. miles to go from matching NYC to matching LA, "Greater San Francisco" needs to add virtually all the cities on the Peninsula down to (but not including) San Jose, 17 adjoining cities:

The final table for Los Angeles vs "Greater San Francisco" is: 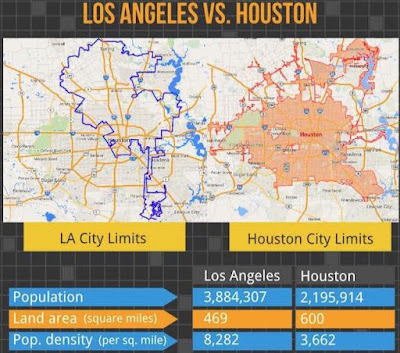 Los Angeles map outline compared to Houston
From: https://www.welikela.com/how-big-is-los-angeles/
(with a mistake in Houston's population and area)
Note that the density of Houston (3,613/sq. mi.) roughly equals the average density of the 317 US cities over 100,000 population.   Houston is roughly the density of Eugene, OR., or Pleasanton, CA, and less than half the density of Oakland, CA.
c.f. https://en.wikipedia.org/wiki/List_of_United_States_cities_by_population#Distribution
What is more, Houston's growth (like that of most cities) is happening along the outer edge - the least dense areas. This means that the entire Houston area is growing even less dense over time.  See map below:
Houston's Growth
Blue = growing population.  Red = shrinking population.
color intensity = %-age growth/shrinkage.
(Click image to enlarge) 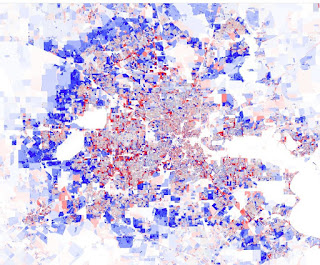 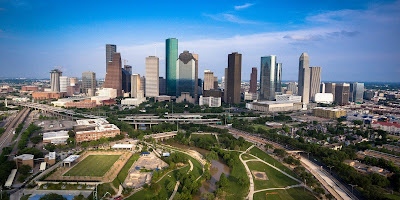 Houston does have a Skyline even though...
...Houston is the least dense of the 10 US cities over 1,000,000 residents.
(Most high rises are office buildings).
The table for Houston vs "Greater San Francisco" is: 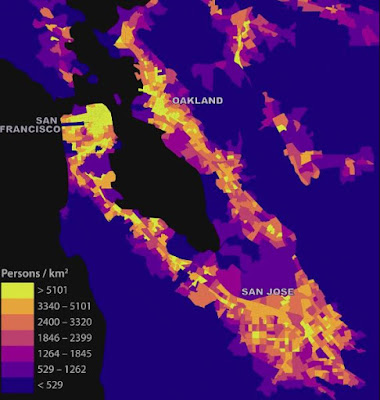 This last "Greater San Francisco" includes nearly all the populated area bordering the Bay
Map from: https://geoffboeing.com/2018/06/estimating-daytime-density-rsrs/
Conclusion:
We have looked at representative large, well-known US cities and seen that being a big city does not mean high density.  In fact what we really see is that despite appearances, the SF Bay cities and towns are already about double the density of most cities in the US.
This partly (by no means completely) explains why some areas of the SF Bay Area are expensive.  There isn't that much land to build on so competition for the available buildable land becomes more intense and the bidding wars drive up prices.
We didn't try to be comprehensive by including Phoenix, Dallas, etc., because by simply looking at the densities (in the Wikipedia article cited above) you can see that Houston (which we did cover) is representative of most US cities.
For now, this is ... 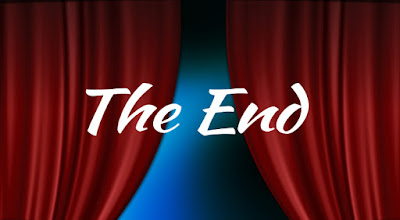