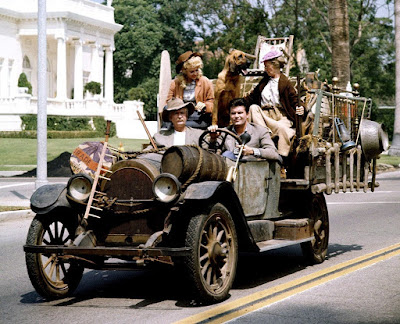 We can see this in the "U-Haul Index" showing where there people are moving from and to.  They are leaving dense areas like NYC, and San Francisco for less dense ("sprawling") cities like Phoenix and Austin.  (click image to enlarge) 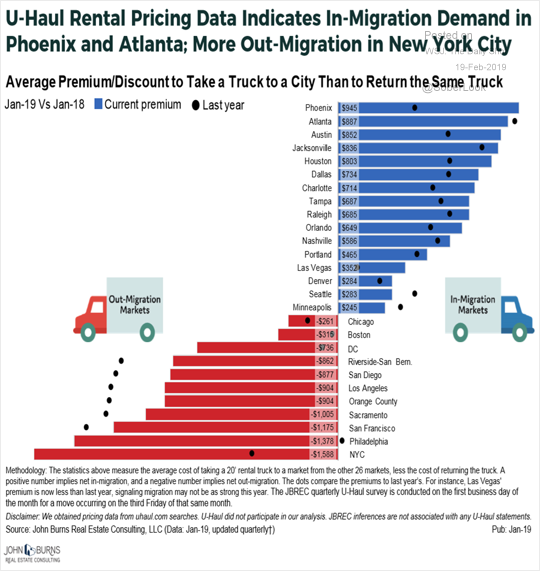 More densely populated areas like California and New York are seeing an out migration to other states.  People want that single family home and will move to where it is affordable.  See next chart of Zillow avg. prices for selected metro areas as of January, 2019 (click on image to enlarge): 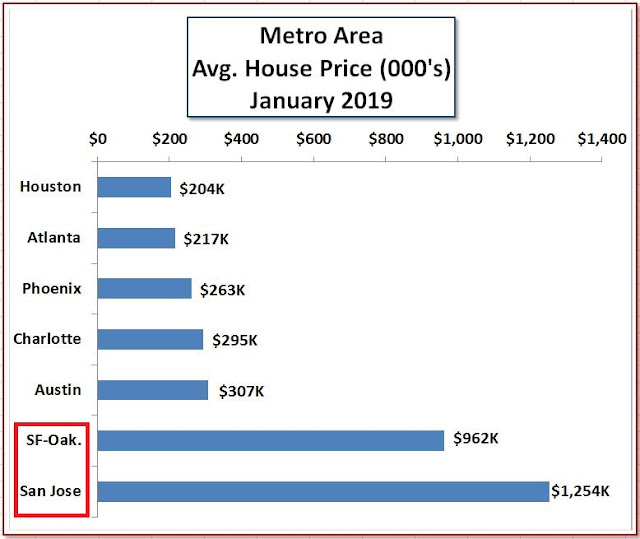 
The US population is moving from rural areas to urban metro areas. But they are preferentially choosing less dense urban areas over the densest metro areas.  People are moving from smaller "micropolitan" areas and denser older cities (mostly in the northern US) to low- and medium-density newer cities (mostly in the southern US) in a great "Balancing Out".

The following chart shows that of those 49 metro areas, the 25 fastest growing metro areas almost caught up (in population) to the remaining 24 slower growing areas.  We will see later that the slow growing areas included the densest.  Click on chart to enlarge: 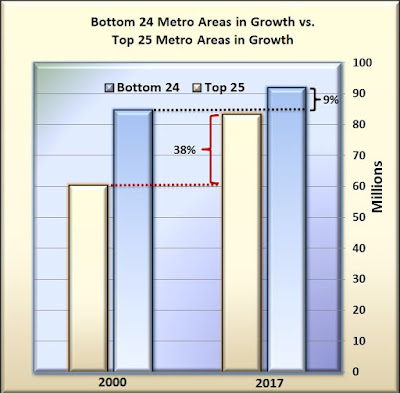 The metro areas gaining population fastest are overall much less densely populated than the slower growth metro areas.  Both in percentages and in absolute numbers high density means slow growth.  Essentially, the denser areas are "filling up" so growth is extremely slow, while the less dense areas are growing very fast -  "catching up" - in population and partially in density.

The US Census Bureau has charted the movement of the population center of the US (see map below).  Until 1930 it was moving steadily westward but not to the south.  That changed after 1930 when air conditioning became widely available and a distinct southward trajectory evinced itself.  Click map to enlarge:
The census bureau has great "visualizations" of this movement.  The one shown below presents a "movie" of the population of the US as it spreads out.  A look at a few slides tells our story of population dispersion.

People move to urban areas to find concentrations of jobs.  Employers locate in urban areas to find concentrations of workers.  However, there is a point of diminishing returns for both, as seen in the graph below from an academic paper on "Optimal City Size":
A higher population density is of value to a worker because there are a higher number of jobs to choose from.  Above some number, high availability of jobs does not compensate for the increased cost of housing that comes with density and the greater time needed to travel to work.  E.g., A 22-minute average commute time in Columbus, OH vs. a 34-minute commute in NYC.  Hence, Columbus grew 29% and NYC grew 10%.
Similarly, in very dense locations, the benefit to employers of a having a large pool of workers to choose from is off-set by the inability of many of those workers to afford housing near work or to commute easily to work because of distance and congestion.  So Toyota moved its North American headquarters from the LA metro area (10% growth) to the Dallas metro area (43% growth).
Some areas are growing faster than average and others are growing slower than the aggregate.  This is because of out-migration from those showing slower growth to those areas showing higher growth.  Part of the migration out of California is due to high housing costs.  They have been far above the US median for decades.  As seen in the graphs below the price of homes in CA has been about 2X the cost in the rest of the US since 1980 - roughly 40 years ago.  (Click on images to enlarge)

Those studying the growth of cities often debate the merits of urban density - one group is for greater density for more viable public transit and to allow more farmland and open space to remain undeveloped.  Urban sprawl is to be avoided.

Another group argues increased density raises housing and administrative costs and should not be forced - i.e., urban sprawl is inevitable and should be allowed, by the latter's thinking.

There is a third group, "most people", who may not even be aware there is a debate - they just get on with their lives looking for the best place to live. 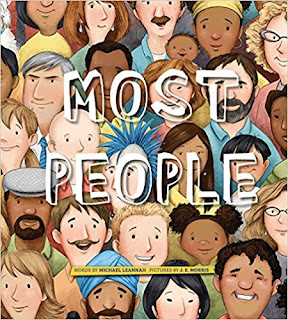 To see what choices people actually make (as opposed to "argue about") we compare two groups of 12 cities each and how they grew from 2000 to 2017.  These 24 metro areas were chosen from the 49 metro areas in the US with populations over one million in 2010.

We choose the twelve highest growth metro areas and compare them with the twelve cities with the highest density.  No city is in both groups - though they could be, theoretically - which is a clue to what we will see.  We compare growth rates versus density (population per square mile).  Click on image to enlarge. 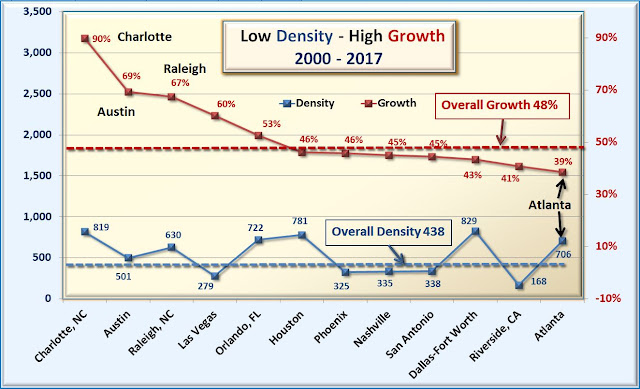 A detailed look at the above "Low Density - High Growth" graph is seen below.  The red data points in the chart show the growth rate for each city over 18 years (right axis).  The horizontal dashed red line shows a growth rate of 48% for the total population of the 12 high-growth metro areas.

We see below that the lowest growth rate of these high-growth dozen was Atlanta at 39% over the 18 years (2% annually).  The blue marker shows Atlanta's metro area had a population density (2010) of 706 people per square mile. 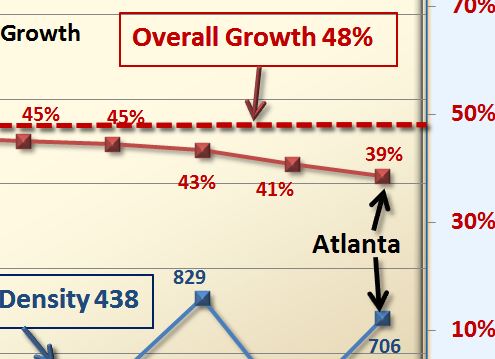 In contrast, we see in the graph below the high density cities with much lower growth - Baltimore grew 10%, LA grew 8%.  Compare to the earlier graph where we saw that low density cities such as Charlotte grew 90%, and Raleigh grew 67%, etc.  Click on image below to enlarge. 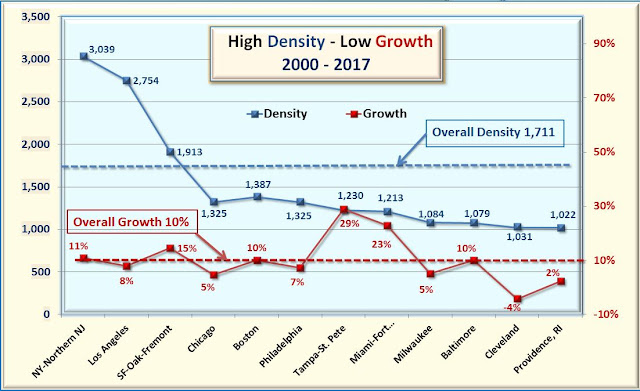 From the above two charts:

In comparing the two sets of urban areas we find:
We can see the general relationship between growth and density in the chart (below) of all 49 metro areas of population over 1 million.  In the middle of the chart is the data for the 49 MSAs (Metropolitan Statistical Areas); i.e., the sum of all the populations.  Click on chart below to enlarge:

Looking at the chart of all 49 metro areas, there are some clear conclusions we CAN and can NOT make in looking to the future.
Climate: Nashville, TN grew 45% in the same 18 years that Memphis, TN (212 miles away) grew 12%.  Same climate but one high growth city and one low growth city.  Other factors matter - a certain amount of randomness is inevitable.  Similarly San Francisco (15% growth) has a mild climate but is very densely populated (i.e. "full") so grew relatively little.

In these, and many other cases (very cold Minneapolis grew 21%, Indianapolis grew 33%), random factors aside from climate and density that are peculiar to each urban area make it hard to predict precisely where growth will occur.  All we can say is that cities in colder climates are at a disadvantage (clearly not an insuperable one) in attracting workers or companies or both.
In conclusion we CAN assert that the combination of "Low density and mild climate" is "very favorable but not sufficient" for fast growth in population.

Companies Growing Away from Density

As the problems with density (housing costs, commute times) get more pronounced, many companies either expand outside the denser metro areas or leave the high density areas entirely for less dense communities.  We noted this above citing Toyota's move from the LA metro area to the Dallas area.  This is equally true for high tech companies in exciting places like San Francisco.

"Zendesk is hedging its bets. In 2014, it opened a small office in Madison, Wisconsin...  “We’re definitely hiring faster in other cities than in San Francisco,” Svane said.
"The company has just signed a new lease for a 60,000-square-foot office in Madison — four times the size of its first outpost, ...United added a nonstop flight to the city in January, making it even more attractive."
https://www.sfchronicle.com/business/article/For-San-Francisco-s-fast-growing-tech-13227433.php#photo-16163249 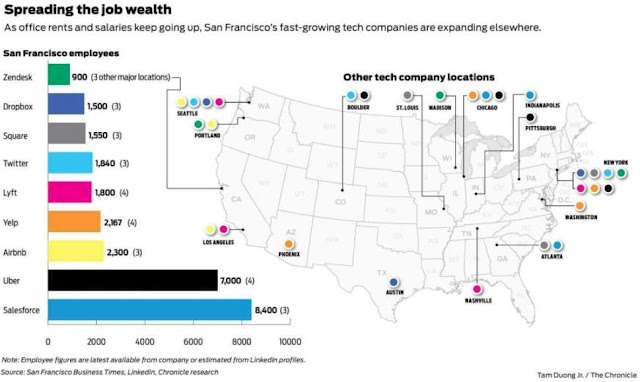 In a very real sense the movement of population is similar to the diffusion of molecules in a container, or fish in a pond.  Molecules and fish and people spread out spontaneously to equally fill the space available.  The same thing happens with humans as seen in the spread of homo sapiens around the world:
We can also see the diffusion equation in action for immigrants to the US. The first generation tends to stay in concentrations of immigrants from the same place ("Chinatown", "Little Saigon") where they can get by in their native language and buy their native foods.  Their children tend to marry within the neighborhood but move outside the area they were born in.  Their children in turn tend to intermarry with whomever they more or less randomly meet in a broad diffusion and melding of peoples.

And so it goes with the US population.  People spread out, following the path of resource optimization.  Cheaper land in Charlotte, NC (90% growth) competes with more expensive land in San Jose, CA (15% growth) so more people move to Charlotte than to San Jose.  That takes away some of the demand for land in San Jose and prices don't go up as much as they might otherwise.  As people move to Sacramento (29% growth), the price of land goes up in Sacramento reducing the pressure on land prices in San Francisco.  This is the "Great Balancing Out" to a broad equilibrium - we are all in the thrall of the diffusion equation - resistance is futile.
A nice MIT video on the diffusion equation for the mathematically inclined is here:

Posted by Michael Goldman at 4:08 PM