Climate Action - What is Attainable?

Sunnyvale has published their "Climate Action Playbook".  It appears to rely heavily on reduction in Vehicle Miles Traveled (VMT) though denser living.  We show that is a counterfactual concept using US Census data from 2002 to 2015.  This shows an 18% increase in Sunnyvale's population resulted in a 33% increase in VMT of those living in Sunnyvale.

When looking at Sunnyvale's "Climate Action Playbook" I was struck by the attempt to lessen Greenhouse Gas emissions (GHGe) by reducing the total Vehicle Miles Traveled (VMT).  The thought is to do this by building more "mixed-use" (retail + housing).  I guess the thought is that if there are stores and work places nearby people won't drive so much.

Using VMT as a metric makes little sense for several reasons.  One is the rather obvious reason that someone driving 100 miles in an electric car has different GHG emissions than someone driving a 15 mpg pickup.

As the price of batteries continues to drop we will see that repeated around the world.  Price parity between Electric Vehicles and Internal Combustion Engines by 2025.  VW is converting 3 factories to 100% EV production by 2021 for 1 Million EVs per year.  See slide below for just 1 factory (Zwickau, Germany):

The future is coming faster than most realize.

But there are other consideration which make VMT even odder as a metric.

Let's look at the 2017 GHGe by source for California from the California Air Resources Board (CARB).

California Greenhouse Gas Emissions for 2000 to 2017


by California Air Resources Board
28% Due to Passenger Vehicles


We see above that transportation is 40.1% of California's GHG emissions but 12% is due to trucks, planes, heavy equipment, etc., leaving passenger vehicles at 28%.   We really can't do anything as a city about the 12% of non-passenger vehicle GHGe (including ships and planes) .  That leaves us with passenger cars.

Between 25% and 30% of passenger car's VMT is for commuting.  That means that to achieve a 20% reduction in GHGe from vehicles virtually no commuting by any sort of vehicle would be possible.
See figure 2 below:

VMT By Purpose
Around 27% of VMT

This is, practically speaking, impossible.  About 85% of commute VMT is by the 50% of workers who commute more than 10 miles.  It is inconceivable that we can get 50% of families to abandon their houses and move closer to work.  For a lot of workers - like plumbers, electricians, construction workers - this isn't even possible because "work place" changes every hour.

VMT for commuting is covered in depth in http://meetingthetwain.blogspot.com/2018/06/commute-distance-in-us-metro-areas.html.  Buses go about 10 miles/hour so 10 miles by bus is the upper limit most people would allow for commuting.

US VMT per Person 1970-2018
20% reduction = 1987 Levels
25% reduction = 1985 Levels
What makes this drastic reduction even more improbable is that US Census data shows as SF Bay Area population density increases the average VMT increases as well.

For example, in Sunnyvale over the period from 2002 to 2015, there was an 18% increase in resident workers yet the VMT of those commuting out of Sunnyvale increased in all categories with a total VMT increase of 33%.  See figure 5 below: 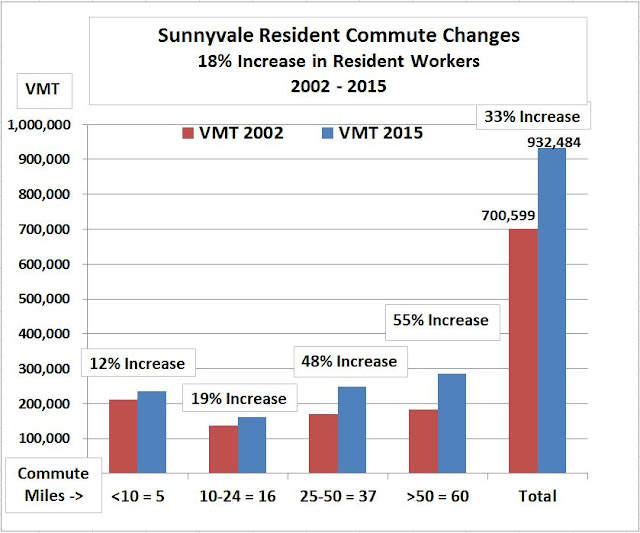 Data is from OnTheMap as seen in a sample in figure 6 below:

Based on this historical data, increasing density increases VMT.  We can see exactly the same thing happening when looking at Palo Alto which has a LOT of jobs.  Nonetheless, as more residents moved to Palo Alto, both the number and

There is an idea that the younger generation is less inclined to use cars for transit.  There is some truth to this, but it is not a huge effect and is dwarfed by the increase in the number of young people.  Overall the effect is invisible in re VMT reduction.  See figure 7 below:

So what is the answer to GHGe from vehicles?  Electrification of transport is proceeding very rapidly.  The decline in price of batteries and therefore of electric vehicles is following a reliable path so that by 2025 the purchase price of a new electric vehicle should be the same as that of new internal combustion engine.
Prices of EVs (Electric Vehicles) will decline from that point on and it will become increasingly uneconomical to buy a petroleum-burning vehicle.  See figures below:

Any program that relies on changes in human behavior is highly unlikely to be successful.  That would rule out significant reductions in VMT through denser housing arrangements.  Much better in terms of attaining goals should look at what can be realistically achieved without postulating changes in human nature.

In the case of Sunnyvale's "Climate Action Playbook" that more realistic action would be inducing companies and households in Sunnyvale to go to net zero buildings with minimal to zero affect on their living situation. 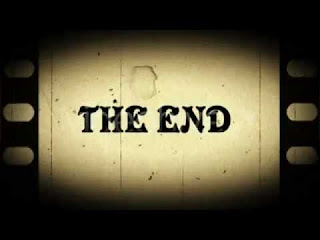 Posted by Michael Goldman at 4:15 PM