Biking as a Solution to Commute Woes?

Bicycling is a healthy activity that should be encouraged.  We all want it to be a safe activity not least because many bicyclists are children.  But, does bike-to-work solve any problems related to Greenhouse Gas Emissions? 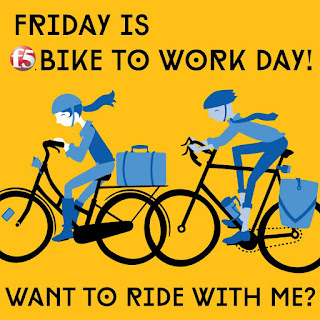 With the most optimistic assumptions, we can eliminate at most 1.3% of GHG emissions if we could get 10% of the US population to abandon cars completely.  More likely is about 0.5% reduction in GHGs by getting 10% to go to car-less commutes.  The reason is that of GHGs, only 26% is due to transportation.  Of that, only half is due to personal vehicles (the rest is trucks, planes, etc.).  Of those personal vehicles, only one quarter to one third of use is for commuting.  So 10% of 33% of 50% of 26% is 0.5% of GHG emissions reduced by biking to work.

That is for the wildly optimistic assumption of 10% of people commuting by bike.  Actually, the percentage of bike commuters is about 1% for the SF Bay Area and only 0.6% for the country as a whole.  That works out to between 0.05% to 0.15% of GHG reduction from those biking to work.

We also look at an experiment in the UK of a town specifically designed to enable more biking.  It did not work out as hoped for.
There are many excellent reasons to bike, or walk to work (health, mental reflection, appreciation of the environment) as described very well here:
https://cleantechnica.com/2017/01/30/benefits-of-walking-bicycling-transit-health-mind/

However, as a way to save on GHG emissions, walking/biking to work is not significant.

Data:  In the SF Bay Area only a little over 1% bike to work   That number has gone up and down but stayed around 1% over the last few decades.  Sunnyvale is not significantly different.  Here is the census data (click on image to enlarge):

Nationwide, we use cars.  (click on image to enlarge)
This has not changed significantly from 2008 to 2016

Vehicle ownership seems to have peaked in the last 15 years: 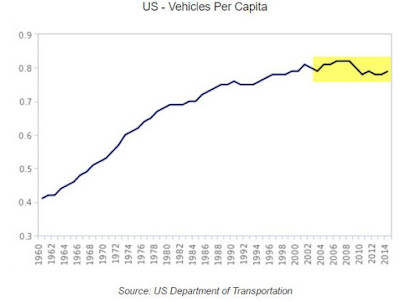 But Vehicle Miles Traveled (VMT - total and per capita) has resumed it's upward trend after declining slightly during the Great Recession.

Commuting is between a quarter and a third of all personal car use.  Getting people out of their cars for commuting is not even close to adequate for serious GHG reduction.  We also need them biking to the store, when visiting friends, and for recreation.  This is possible in that it doesn't violate any laws of physics so let's assume that everyone who bikes to work also bikes to everything else, too. (click on image to enlarge)
The average speed of bicyclists is 10 mph.  Of commute distances, about 50% are within 10 miles of home (= about 1 hour each way) which is probably the outer limit for most people to commute by bicycle. (click on image to enlarge)

...is frequently mentioned as an example of how successful biking can be in terms of percentage of people biking.  The following graph shows that is in one sense true with some locations varying between 10% and 40% biking.  This deserves a further look.  (Click on graph below to enlarge)
The graph above is only counting share of trips made, not distance traveled.  When we look at distance we find little difference between European and American bike-friendly cities.  Portland, OR is likely the US's most bike-friendly city so we compare it to Rotterdam which is about the same size in population.  In both cities we find that most trips traveled by bike are under 3 miles long and max out at around 10 miles.  See graph below:

Both graphs above from:
https://bikeportland.org/2014/10/21/five-surprises-comparison-portland-dutch-travel-choices-112468

We see that in both cities the max distance traveled by bike is around 3 to 6 miles.  Nothing wrong with that.  In the US that includes up to 29% of commuters as seen in a previous graph. (reproduced below): 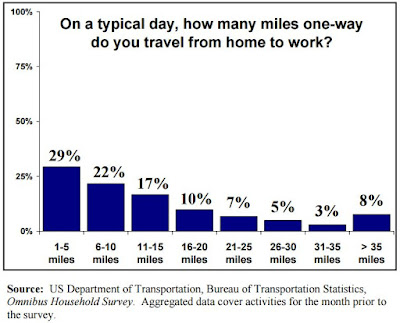 VMT is calculated by multiplying the number of trips by the miles per trip.  That means that 10 drivers switching to bicycles for 3 mile trips cancels only 1 person driving 30 miles (i.e., 10 x 3 = 1 x 30).  We calculate that for the US Dept. of Transportation data above. Representing 29% of commuters by 29 vehicles, etc., and using the upper bound for miles commuted we get:
The above table shows in the last column VMT with everyone who commutes 5 miles or less bike to work - so that box is zero.  The last two rows show that if everyone within 5 miles of work commutes by bike it reduces VMT only 9%.  This is meaningless in terms of reducing Vehicle Miles Traveled (VMT).  It reduces local congestion but it is usually not the small side streets that are the problem, it is the major access highways.  In the case of Silicon Valley, it is not El Camino Real which is the problem (sometimes it is) but highways 237, 101, 280, and 85.  Biking does nothing to help them.

In chart form the table above looks like this:

... cities were better designed to accommodate bikes?  That actually happened with disappointing results.  In 1949 in the UK, a new town Stevenage was planned out specifically to make biking as easy as possible by an urban planner who was a biking enthusiast. 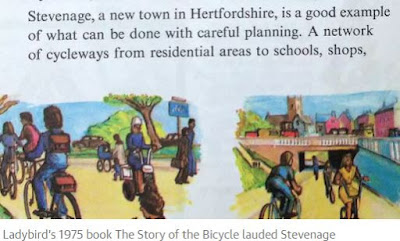 The result was a total failure.

"But to Claxton’s puzzlement and eventual horror, residents of Stevenage chose to drive – even for journeys of two miles or less. Stevenage’s 1949 master plan projected that 40% of the town’s residents would cycle each day, and just 16% would drive. The opposite happened. By 1964, cycle use was down to 13%; by 1972, it had dropped to 7%. (Today it has less than half that, and yet some neighbouring towns with few cycleways have cycling modal shares of 4-5%.)"
https://www.theguardian.com/cities/2017/sep/19/britains-1960s-cycling-revolution-flopped-stevenage

The problem seems to have been that it was just as convenient to use a car since the roadways weren't congested.  So people drove, even if it was less than 2 miles.  This implies that if the number of bicyclists increases enough to clear congestion people will switch back to cars until the congestion increases to the point where bikes are more convenient.  In other words, most people use bikes only if cars are less convenient.


So what about Green House Gas emissions (GHGe)?  Transport (including ships, planes, freight trucks) is about 26% of total GHGe. (click on image to enlarge)


Of the 26% of GHGs originating from transportation, light-duty vehicles (cars, SUVs, pickup trucks) are 63%.   (click on image to enlarge)

We have to allow that some of the light duty trucks are actually used for work so Joe the Plumber has to "commute" to work in his truck as he visits everyone with a clogged sink.  At most, maybe 50% of Transport GHGs are from people commuting by car but who might be able to bike or take buses.  If we got 10% of those people currently commuting by car to commute by bike, we'd be doing very well indeed (recall currently 0.6% of Americans bike to work).

... is the upper limit of how much GHGs would be eliminated by getting 10% of all commuters to abandon their cars completely for not only commuting, but also shopping, and recreation.  If abandoning cars applies only to commuting and they still use cars for other things, then it is at most a third of that 1.3% (about 0.5%) of GHGs would be eliminated by getting 10% of commuters to bike to work. 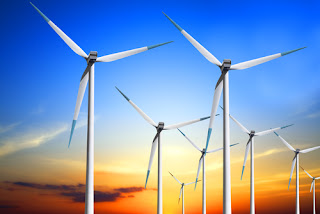 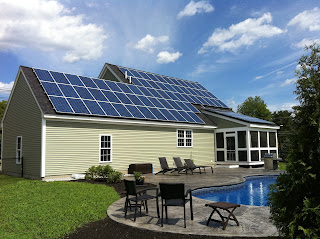 Posted by Michael Goldman at 8:05 AM