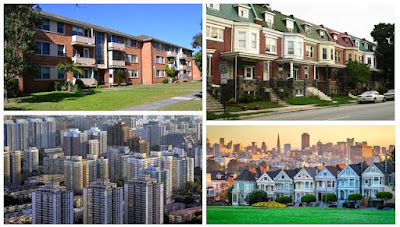 All Kinds of Homes
Summary:  The Regional Housing Needs Allocation (RHNA: pronounced Ree-NA) has been misused by interpreting it as a requirement for cities and counties to build housing regardless of whether or not there is a need for new housing, or hos much of each category.  This "requirement" has been used as a way to remove local control from cities and counties statewide and more importantly, to remove reasonable considerations and requirements for new construction such as parking, traffic, and environmental impacts.

Details:  California has something called the "Regional Housing Needs Allocation", usually pronounced "ree-na".  It is intended to indicate how many housing units for different income levels a city or county needs to zone for.  See screen shot below (click to enlarge):

RHNA numbers are being misinterpreted in order to justify California laws overriding local control of development.  Proposed laws like Senator Scott Wiener's SB-827 would have allowed high rise apartment buildings in the middle of single family neighborhoods.  Under existing law (SB-35) and proposed laws (SB-827, SB-828), builders would not need to consider residents' legitimate concerns about traffic, schools, parking or much else.  No public hearings, no parking requirements no environmental impact requirements.  All this because of gross misinterpretations of what RHNA numbers really mean.

In this part we look at RHNA numbers as applied to various cities and counties and see that if understood to mean "goals" they make no sense.  In Part II we will look at what RHNA numbers actually mean.

A list of over 500 cities and counties that "didn't make their RHNA numbers" is available from the State Housing and Community Development Agency (HCD).  Cities and counties on the list are subject to Senator Scott Wiener's SB-35.  The list looks like this:

Is there a shortage of affordable housing in Biggs?  Depends what you mean by affordable.  Here's a nice house for $150K.

We'll see in the next census if they have reversed their population decline.  In any event, "housing crisis" hardly describes Biggs' situation.

The picture below of Amador is from the "Encyclopedia of Forlorn Places" which notes that "The town mostly burned down in 1878 but some buildings survived that fire. It's a great town to walk around in."  No one built housing recently - maybe they are afraid of another fire like the one in 1878.  Sure, it's been 140 years, but you never know, right?  "Once burned, twice shy."
Here is a screen shot of the Amador County housing spreadsheet with Amador City at the very top  (click to enlarge):

It shows that the town of Amador's RHNA numbers were for 2 housing units.  One for "Very-Low" and one for "Low".  No one built those two units so Amador "didn't make their RHNA numbers."  And for that, Amador City is on the list of jurisdictions subject to SB-35.  Too bad! 😢 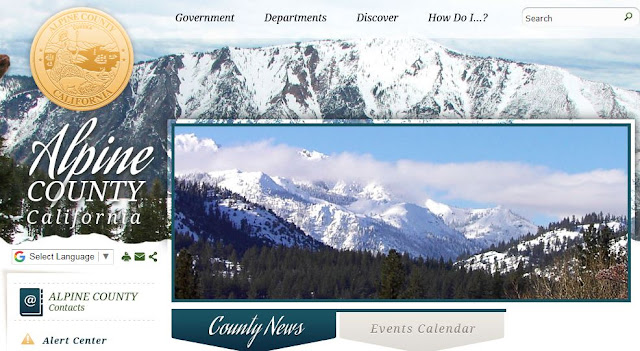 There are ski resorts and lots of up-scale vacation homes - probably vacant most of the year.

Nonetheless, the California State HCD lists them among jurisdictions (cities and counties) that "..have insufficient progress toward their Above Moderate income RHNA ...subject to SB 35."  Their "RHNA numbers" are seen in the spreadsheet screen shot below (click to enlarge):

Because no one built 11 housing units for Above-Moderate income people, Alpine County "didn't make their RHNA numbers".  (Maybe only 10 were built - but that wouldn't be enough.)  Therefore, should a builder want to, they can, to some degree, bypass local planning regulations.  Of course, it is highly unlikely anyone wants to build in a county where the population is declining and only about 6% of the land is not owned by the US Govt.  Doesn't matter.  Alpine County "didn't make their RHNA numbers" so local control in terms of considerations of traffic and schools is over-ridden by Scott Wiener's SB-35 and any other bill based on RHNA numbers.

Like Alpine County, Sierra County "didn't make their RHNA numbers" and is subject to SB-35 to alleviate the "housing crisis".  Let's all hope someone decides to build 11 units of "Above Moderate income housing" in Sierra County so the "Housing Crisis" will be resolved! 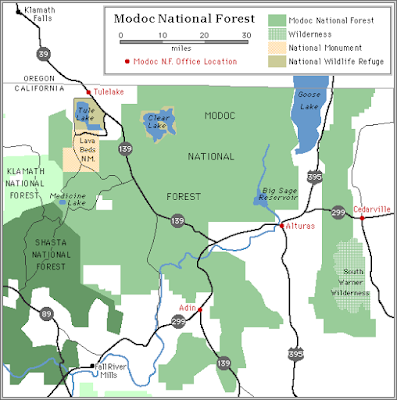 Original home of the Modoc People.  Most of the land is owned by the US Federal Govt.  The National Park Service and National Forest Service employ a large fraction of the population.  The county is on the border with Oregon and Nevada.  It reached a population of 8,000 in 1930. Population has never reached 10,000 inhabitants.

Like Alpine and Sierra Counties, Modoc County "didn't make their RHNA numbers" and is subject to Scott Wiener's SB-35 to alleviate the "housing crisis".

Other Counties:  Here is a list of 15 counties in California most of which lost population over the 9 years from 2010 to 2018.  I added Amador and Kings which gained a whopping 3 and 31 residents, respectively, in those 9 years.  All of them are on Scott Wiener's list of infamy for not resolving the state's "housing crisis".

In the counties listed above, no one asked for as many permits as the RHNA numbers indicated had been planned for.  Probably because there is no demand for new housing in poor counties that are losing (or not gaining much) population.  As a result, those counties "didn't make their RHNA numbers" and are subject to Scott Wiener's SB-35.

It should be obvious by now that the phrase "didn't make their RHNA numbers" does not mean what you thought.  Don't use it.

This Concludes Part I.

Posted by Michael Goldman at 7:43 PM