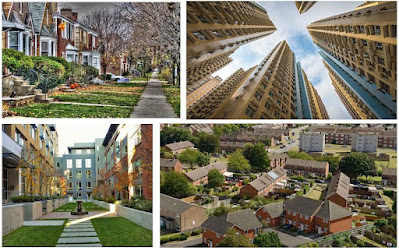 All kinds of homes for all kinds of people
In Part I we saw how ridiculous is the current application of RHNA (Regional Housing Needs Allocation) numbers to housing in terms of Scott Wiener's SB-35 law.  Part I is here:
https://meetingthetwain.blogspot.com/2018/09/ree-diculous-ree-na-part-i.html
Part 3 is here:
https://meetingthetwain.blogspot.com/2021/04/californias-2021-rhna-bills-part-1.html
In this, Part II, we see what RHNA numbers are actually for.


The California State Dept. of Housing and Community Development (HCD) is the agency in charge of ensuring that there are "housing elements" of the General Plan for each jurisdiction.  This is to ensure that zoning and guidelines are in place so that housing for different incomes can be built should a builder want to.

More about HCD and RHNA here: http://www.hcd.ca.gov/community-development/housing-element/index.shtml
Part 3 is here:

https://meetingthetwain.blogspot.com/2021/04/californias-2021-rhna-bills-part-1.html
The narrative of "housing activists" (some adopt the name "YIMBY") is that cities, by refusing to build housing or allowing others to build housing, are creating an artificial shortage of housing thereby driving up the price of what housing there is.  There are two problems with that narrative.

If you want more housing, go build some.  Buy the land, hire architects and workers and build it.  As long as you follow all the various fire codes, construction codes, and zoning rules then you can build what you want.  You will go before a planning commission to make sure you follow the rules and then you start construction.  The city council will look over your plans only if you want a waiver from some rule.

Holding cities and counties responsible when they have no control over who builds or doesn't build housing - is irresponsible.  In particular, holding cities responsible for not building a specified quantity of housing for a particular income level makes no sense because cities don't build housing.  There is an issue if cities stand in the way of builders building housing but that has nothing to do with RHNA.  We will hold that discussion off to Part III.

Problem Two...
...is that the RHNA numbers make no sense in relation to the "housing crisis".  As we saw in Part I, some cities and counties are very poor choices for housing development, and contribute nothing to the current "housing crisis".  Yet, because "they didn't make their RHNA numbers" those cities and counties lose local control over planning and zoning.  Of the 58 counties in California, 47 "didn't make their RHNA numbers" for reasons that have nothing to do with resident objections.  Nonetheless, they are subject to what are becoming increasingly draconian state laws over-riding local control.

RHNA is a planning tool.  It is not a "goal" - though you will hear that word used frequently.

You can get the complete HCD list of RHNA spreadsheets or PDFs here:
http://www.hcd.ca.gov/community-development/housing-element/index.shtml

If no one builds the housing in the RHNA spreadsheet, all it means is that no one built housing there.  It isn't a failure to meet a "goal".  RHNA numbers aren't "goals" - they are requirements for planning.

But "goals" gets repeated over and over again implying cities or counties aren't trying hard enough.  If only cities would just get on with it and do something!  But what?  If builders decide not to construct apartments or houses in the quantity desired, no city or county can force them to.  Here are some newspapers reporting as "goals" what are really more like "zoning allotments".

"The Bay City Beacon"
"According to the Department of Housing and Community Development (HCD), 97.6% of California cities did not meet their full RHNA goals."  (Like, Biggs, Alpine County, etc., looked at in Part I.)  "Only 13 cities (2.4%) met their goals in full, and would be exempt from SB 35 streamlining."from:
https://www.thebaycitybeacon.com/politics/of-california-cities-failed-to-meet-state-housing-goals-and/article_a609ae5e-09d7-11e8-a94e-3b67baeaae8b.html

This is the fault of the Bay City Beacon reporter who fell for the "goals" concept.  Nowhere can I find HCD calling them "goals".

Official Description of RHNA Objectives
(Which Are NOT Goals!)

Interestingly, official documents about RHNA numbers never use the word "goal".  That is a word only used by people like Senator Scott Wiener and repeated by some newspapers - possibly merely quoting Senator Wiener.

What does California's Housing and Community Development (HCD) Agency say about RHNA?  The main information web page for HCD is here:
http://www.hcd.ca.gov/community-development/housing-element/index.shtml

Under "Background" they say that because funding for housing usually requires "a compliant housing element" there needs to be a well specified description of what is zoned for.
The number of housing units that must be planned for (including zoning but other aspects are considered, too) is allocated on a regional basis by HCD.  The regional Council of Governments (like ABAG in the SF Bay area) allocates it within the region.  They have formulas they use but they are allowed a certain amount of flexibility so it isn't a hard and fast set of rules.

HCD's website states under "Housing Elements" that "Since 1969, California has required that all local governments (cities and counties) adequately plan to meet the housing needs of everyone in the community. California’s local governments meet this requirement by adopting housing plans as part of their “general plan” (also required by the state)."

Tulare Council of Governments
"Allocation targets are intended to assure that adequate sites and zoning is made available to address anticipated housing demand during the planning period and that market forces are not inhibited in addressing the housing needs of all economic segments of a community."
http://www.tularecog.org/rhna/

In other words it is a planning tool.  Market forces determine what gets built and in what quantity.


Santa Barbara County
"The housing targets are intended to assure that adequate sites and zoning exist to address anticipated housing demand during the planning period."  It is not a requirement or goal that the housing gets built, only that there be space allocated and zoned for housing.
https://www.ca-ilg.org/sites/main/files/file-attachments/rhna_plan.pdf


San Diego Association of Governments
"The Draft RHNA Methodology and Allocation distributes housing in accordance with the four RHNA objectives in state law: by reflecting the region’s commitment to planning for housing for all income levels in all jurisdictions, balancing jobs and housing, focusing development in our urban areas, and protecting our rural areas, open space, and habitat lands."
https://poway.org/DocumentCenter/View/121/Regional-Housing-Needs-Assessment-RHNA-Fact-Sheet-PDF?bidId=

I highlighted the part about protecting open space and habitat lands because some people seem to think RHNA is about housing, more housing, and only housing.  The goals are a balance between housing and many other things which make places nice to live in.

Southern California Association of Governments
"Because RHNA is a representation of housing need for the eight year planning period, it does not necessarily address existing housing need. ... State housing law requires that jurisdictions plan for all types of housing based on the needs identified through RHNA.  In addition, local jurisdictions are also responsible for ensuring there are no unnecessary barriers to the housing approval process."
http://scagrtpscs.net/Documents/2020/RHNA2017FS.pdf

Note the phrase "plan for", not build.


You can get the complete HCD list of RHNA spreadsheets or PDFs here:
http://www.hcd.ca.gov/community-development/housing-element/index.shtml

The RHNA numbers were only intended to indicate what zoning should be incorporated into publicly available city and county general plans.  This enables builders to know what and where they could build.  It was not intended as a "goal" for a city or county.  This is because of the very simple fact that cities and counties don't build housing.

More than anything, this shows Scott Wiener's SB-35 is a grotesque misuse of a general planning tool.

But what about places that refuse to allow certain housing to be built?  Aren't they violating RHNA?  No.  The cases that get the most prominence - like Brisbane - have nothing to do with RHNA.  Those that get the most publicity are just some builder complaining a city won't let them build somewhere.  In the case of Brisbane it is on an unregulated toxic waste dump that really should be an EPA "Superfund" site.  RHNA does not enter into it in the slightest.

Builders build housing and if they decide for perfectly legitimate reasons that there is no market for new housing - if, for example, the area is not growing in population - they will not ask for a permit to build.  Even if they do build, but not to the numbers specified in the RHNA spreadsheet, for the income levels planned and zoned for, that city or county "didn't make their RHNA numbers".

This concludes Part II.
Part I is here:
https://meetingthetwain.blogspot.com/2018/09/ree-diculous-ree-na-part-i.html 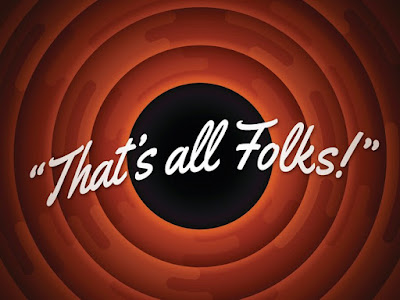 Posted by Michael Goldman at 11:32 PM