Other Posts on District elections:

This is post #5 on district elections.  Links to other posts below:

Part 3 - Sunnyvale gets a letter saying we must move to district elections (most popular):
https://meetingthetwain.blogspot.com/2018/10/sunnyvale-district-elections-part-3_6.html

Part 4 - California Code #34886.  The way the City Council could (likely will) go to district elections.  Why was it not presented by staff as an option?  Also, "Cumulative Voting".
https://meetingthetwain.blogspot.com/2018/10/district-elections-cvra-4.html

Part 6 - Will there be enough candidates to fill city council seats when we go to district elections?
https://meetingthetwain.blogspot.com/2018/11/election-districts-part-6-number-of.html

From the letter: "FairVote used Auto-Redistrict, an automated redistricting program which uses a genetic algorithm to design districts that meet multiple redistricting criteria. FairVote did not attempt to manually construct a district plan."  That district plan is shown below.

The map is not what Sunnyvale will go to.  It has several "issues" from a "neighborhood character" viewpoint.  For example, the "heritage district" will likely be more unified rather than split among several districts.  Also, districts 2, 4, and 6 might be more compact.  However, it is the only potential district map we have for the moment so it will serve as a point of discussion. (click to enlarge map).


Some acronyms used in the following discussion:

In the following discussion, "Asian" is used very broadly to include people from China, India, Vietnam, Pakistan, Japan, etc.  Of course, there is very little in common culturally or linguistically between many of the subgroups but in the US they often unite because they face similar problems related to their ethnic origin.

Here is a breakdown of ethnic groupings in Sunnyvale.  (I used the colloquial word "White" for Caucasian because it fits better in the graph label.  I am well aware that many Asians have very pale complexions and many Euro-ethnics have dark complexions): 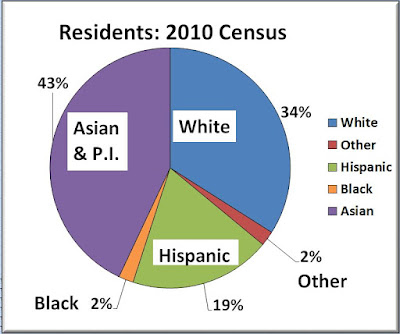 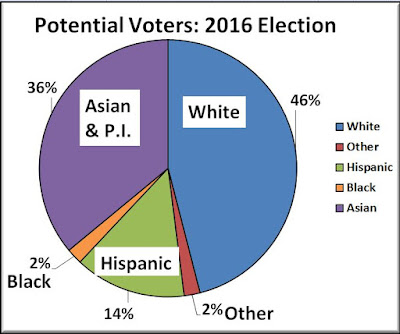 Actual Voters 2016
Presidential Election so turnout is higher than in elections for governor. 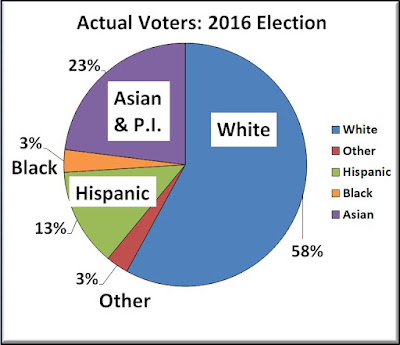 FairVote's analysis of their district map (for discussion purposes only) is shown below.  CVAP stands for "Citizen Voting Age Population".  Click on table to enlarge:

The percentages from Table D above are presented graphically below, with "Other" added into the Asian sub-group. (click to enlarge): 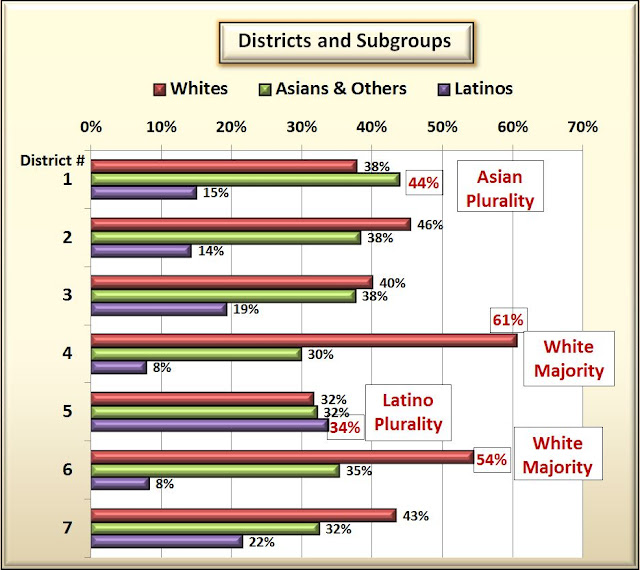 From the "Table D" above we see the maximum and minimum percentages for each major subgroup as shown below ("other" is not included with Asian):

From the Table D data we see that whites are the only subgroup to get a majority district.  That occurs in districts, #4 and # 6.

Asians (excluding "Other") hit a maximum of nearly 40% in district #1.  In that district they form a greater bloc than any other group, including whites.  Any person elected from such a district, Asian or not, needs to pay attention to interests of their largest voting group - Asians.  Even with "Other" included, that does not change.

In district #5, at 34%, Latinos are the largest single voting group, greater than whites or Asians.  As with Asians in district #1, any person elected from that district needs to pay close attention to the concerns of the Latino group.

Some people keep insisting we can keep at-large elections by some combination of voting systems and multi-member districts.  We can't.  It will not be acceptable to a judge.  Only single member district elections satisfy the CRVA - with one exception which would not apply to Sunnyvale.

The one exception to district elections is in Mission Viejo in which a lawsuit was temporarily settled with cumulative voting but that is subject to revocation by the suing attorney if the situation does not work out.  A neighboring city, Santa Clarita, was denied the same remedy.  The particular situation in Mission Viejo is that only about 1 in 7 voters is a minority so the only possibility of their obtaining representation would be cumulative voting.

By going to district elections, the voting area in Sunnyvale would become small enough (around 8,500 voters) that an individual candidate could walk to every house, and afford mailers to everyone because there are far fewer voters to walk to and mail to.  This is very important.  It is not just a matter of making sure a minority has a large concentration of voters in a district, it is a matter of removing "barriers to entry" for disadvantaged groups.

The major groups in FairVotes' analysis are White, Latino, Black, Asian, and Other - Miscellaneous Pacific Islander. 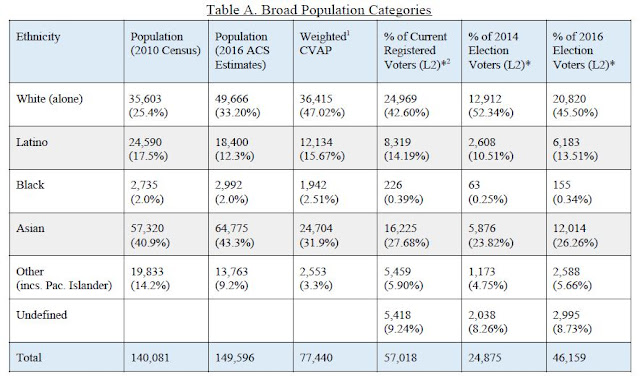 All Kinds of Asians 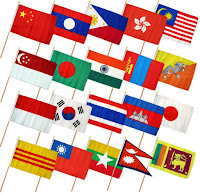 Not all Asians are the same.  Within the general Asian grouping, languages are completely different and cultures and customs vary widely.  From the FairVote letter we see the "Asian Subgroup" registered voters in Sunnyvale are 13% Chinese, 7.5% Indian, and each of five other subgroups below 3%, as seen in the table below.  Click on table to enlarge. 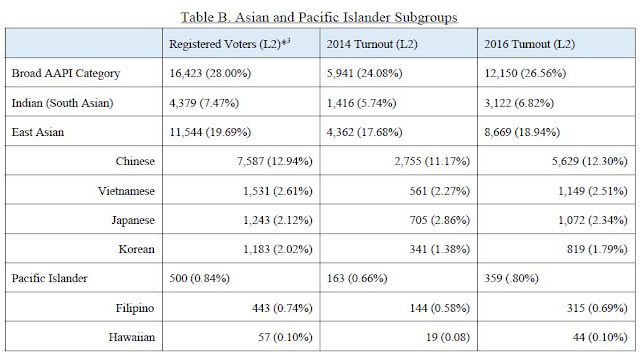 Economics is another confounding factor.  Chinese engineers may have more in common with white engineers than with Chinese restaurant workers.   Still, members of each ethnic group share some common interests regardless of economics, and discrimination based on external appearance takes no note of economics, or of language subgroups.

FairVote's letter also includes some maps of the two major groups reproduced below: 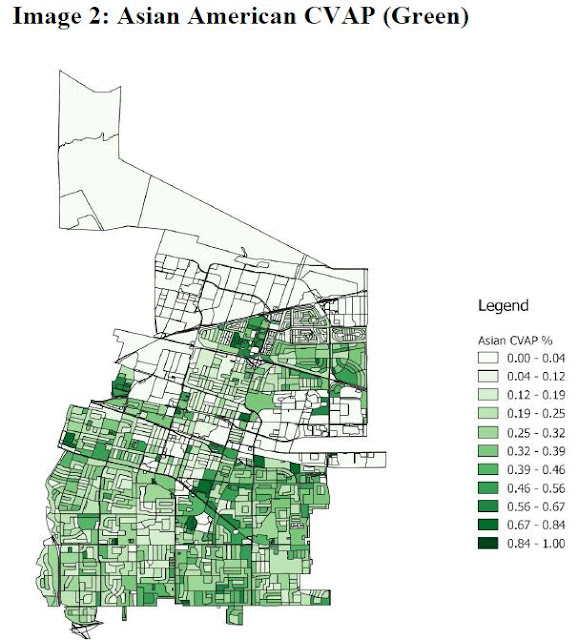 After a number of tries, FairVote's analysts were not able to generate a majority Asian or Latino District.  They were able to generate plurality districts for Asians and Latinos, as noted above.  Further complicating factors are that East Asians from China may vote differently than South Asians from India or Pakistan. 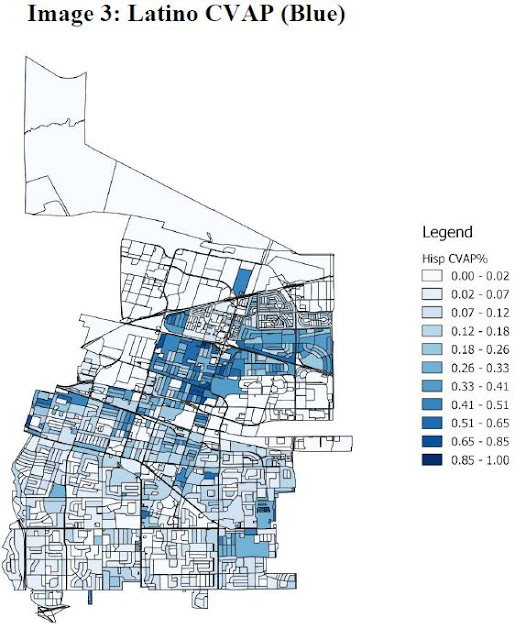 There is much more in the 13-page letter but this covers the highlights.

"...1788 the first states elected their members of Congress At-Large, or statewide. Most soon saw how this left significant regions of their states without local representation and so they started using regionally based districts. By 1842, 6 of the 28 states—the ones typically dominated by one party—clung to the At-Large voting method to control all the seats. That year, Congress banned this voting method, a ban that was several times canceled and then reinstated until the passage of the 1965 Voting Rights Act..."

After the Civil War, the former confederate states successfully used at-large voting to suppress the black vote.  It was finally outlawed with the Civil Rights Act of 1965.  More here:
https://www.nonprofitvote.org/bias-large-elections-works/

The San Jose Mercury News had a very good article on district elections titled "Where Power is Shifting..." here:
https://www.mercurynews.com/2018/11/09/where-power-is-shifting-as-cities-move-to-district-elections/

Posted by Michael Goldman at 3:37 PM