This is a 1 year update of my earlier post:
http://meetingthetwain.blogspot.com/2017/02/is-there-housing-crisis.html
Everything in that earlier post is still relevant, but I thought I'd update some of the housing data and add more historical context.

The rise of housing costs was starting to subside in the SF Bay Area last year as companies expanded elsewhere.  This seems to have been a temporary lull.  Hiring is still increasing faster than housing can be built in the SF Bay Area.  The geographical area occupied by tech employers is expanding in an ever-widening circle raising housing costs in increasingly remote areas.
As housing booms go, this current boom is not all that exceptional.  The affordability across counties in the San Francisco Bay area is reminiscent of 1991 (far left of the following chart) when it started rising to 20% (of residents could afford to buy a house in SF) or 40% (far out in Sonoma County).  The chart below makes it clear that affordability goes up in recessions and goes down in economic growth periods.  Affordability is higher in further out counties like Sonoma than the job centers of San Francisco and San Mateo. (click chart to enlarge)
At no time in the last 26 years have more than 28% of San Francisco residents been able to afford a house in San Francisco.  Most of the time it has been bouncing around between 10% and 25%.  SF is expensive now, has been in the past, and will be in the future.  Even in Sonoma County the percentage of people who can afford a house has varied from 10% to, at the very most, 50%.  Usually affordability is around 30% meaning only 30% of residents can afford to buy a house.  This is not a crisis.  This is a permanent condition.

In other words,
Either: lots of high paying jobs and high housing costs
Or: jobs are hard to get and pay little, but housing is cheap(er).
Either way  - it's cheaper further out.
Possibly the least surprising economic correlations - ever.

Because of the increasing concentration of high paying jobs, land is becoming so expensive that it is the overwhelming part of housing costs.  The high price of land makes it impossible to build anything but luxury housing in or near Silicon Valley or most of the SF Bay Area.

As a result, housing prices are reaching new highs in the mid and high priced homes and the lowest 3rd of homes by price are close to their 2007 bubble highs as seen in the following chart.  (click to enlarge)
Consider, for example, the cost of a vacant plot of land in Sunnyvale (assuming you could find one).  Such a (hypothetical) vacant plot would cost about $1.6M.  Constructing a small cheap house costing $150,000 in labor and materials compared to building a large expensive house costing $250,000 is the difference between a $1.75M and $1.85M base cost - less than a 6% difference.

Might as well build the large house and while you're at it, add granite counters, and marble bathrooms for another $40K - it's just icing on the cake.  Those luxury touches make the large $1.85M house a $1.89M house.  Who cares about the third significant figure?  So all new housing becomes luxury housing.
Building up doesn't make this better because the increase in rental income makes the land even more valuable.  Land costs and density are examined in detail here:
http://meetingthetwain.blogspot.com/2017/01/live-work-commute-2.html

The following chart shows that as you get further out from the center of economic activity, the lower the rents.  Sprawl happens because people can't afford to live close in.

We have seen these bubbles before as seen in the following chart covering the last 33 years back to 1984:
We can put these rises and falls (seen in the last chart above) into perspective by looking at a house that cost $250,000 in 1985.  Using the chart directly above to plot all the ups and downs to get to now when it costs $1.6M - see below (click image to enlarge). 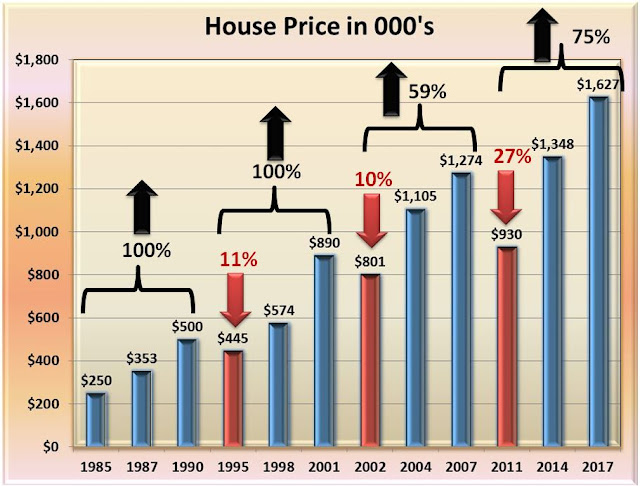 Using the above chart we can see that buyers of a house in 1985 caught the beginning of a boom and felt "rich" 5 years later in 1990.  On the other hand, those buying in 1990 probably felt like chumps 5 years later in the slump of 1995 when their house equity went negative.  Then, 9 years later, in 1998, with the house back up 15% from where they bought it, they might have felt philosophical that "after all, a house is a home" not an investment.  By 2001, 11 years later, they were likely to feel like financial geniuses, and on, and on...

In fact, for all the talk about "housing crisis" this current rise is a relatively mild percentage increase in housing compared to previous booms - see the following chart.  The percentage run up in prices in the previous two economic cycles in 1985-1995 and 1996-2001 (Dot-Com bubble) was significantly greater - 100% vs current 75%. The latest run up in prices is sort of average right now, though in dollar terms they are new highs.  Less than the earlier two bubbles but greater than the US sub-prime housing bubble that burst in 2007.
The above chart points out the fallacy in the oft-repeated phrase "since 2010, [number] thousand jobs have been added and housing has not kept up."  2010 was the bottom of the "2007 Housing Bubble" recession.  Housing prices in the SF Bay area were declining from 2007 to 2012. 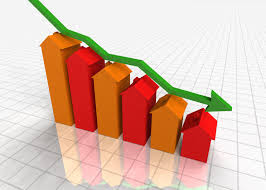 No one is going to build new housing if existing housing is losing value.  If prices are going down, then supply exceeds demand.  The market is saying "don't build!"  In that time period there were a lot of foreclosures, and mortgage defaults.
Housing construction could not reasonably be expected to start until builders were sure their units would sell at a profit - which means 2013.  Once all the paperwork is done and the land purchased and the house designed it still takes about 2 years to build new housing.  This means new employees added from 2010 to 2013 would not see any new housing until 2015 at the very earliest.

Builders won't build for people that aren't here yet.  As long as new jobs are being added, construction will always be playing "catch up".   There will always be a "shortage" as long as jobs keep forming faster than housing can keep up.

As the companies expand, the increase in housing prices near work spreads out in an ever widening circle - like a drop of ink on tissue paper - meaning people who aren't getting the higher tech salaries have to commute from further and further away.

People keep asking me for a solution to this "problem".  It's a problem only if you want two things that are incompatible, in which case, the problem is you.

One or the other, make up your mind.
The following chart shows how much you need in salary to buy a house in any of 50 US metro areas.  San Jose is at the far right at over $200K, San Francisco is next to it at $175K.  The average for all 50 metro areas (center maroon bar) is slightly above $50K.  (click graph to enlarge to readable size.)
Where more high salary jobs are added, the housing prices will reflect what (some) people can buy.  Those houses won't sell unless someone can buy them.  It may not be you, but someone has the money for that house.  Those that can't keep up need to figure out whether it it is worth staying or moving to one of the the many lovely other parts of America, the Beautiful.  Adults make choices and accept that there are trade-offs with any decision.
Perhaps the anger floating around about housing costs can be directed at the companies that can't figure out how to create jobs outside the SF Bay area.  They can have R&D centers in India but not Indiana?
There is in fact an enormous amount of building going on around the country including the SF Bay area.  As a result, a huge number of single and multi-family housing units (more than 5 units per building) will becoming available soon.  Single family housing starts are near 10-year records.  See following charts: 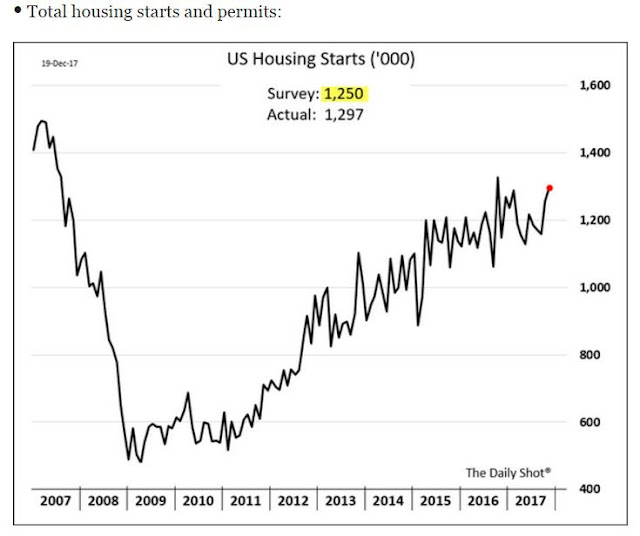 Multi-family housing inventory is about to get it's biggest increase since 1975 (43 years ago). 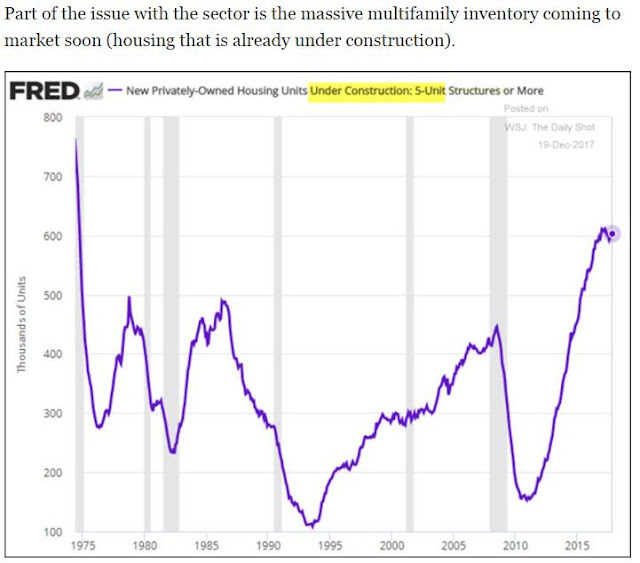 Housing price swings are a regular feature of the US economy as seen in the following chart from census data from 1963 through mid-2011 (click on graph to enlarge): 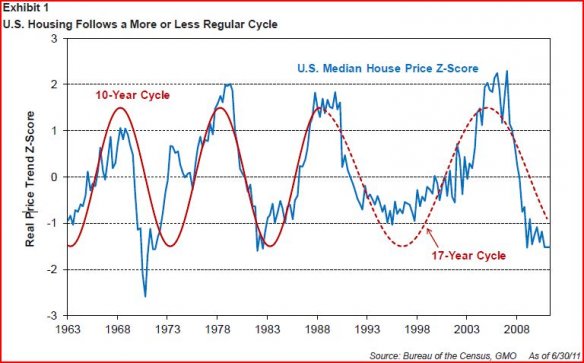 So how is this boom different?  Mainly in the builders' PR.  By terming this, not particularly exceptional boom, a "housing crisis" and getting everyone to accept that term, they create a panic-driven urge to over-ride all reasonable zoning limits.  And ignore the problems of getting people to and from work.
Well, many people are honest and trusting and aren't prepared to deal with profit-driven attempts to panic them.  A little cynicism is in order.  When you wake up and realize you've been manipulated it feels really awful.

Posted by Michael Goldman at 2:47 PM