Introduction:
The oft-repeated claim of a 3.5 million homes "shortage" in California is partly based on the McKinsey Global Institute's 2016 Report "A Tool Kit to Close California's Housing Gap: 3.5 Million Homes by 2025".  The McKinsey report takes data so far out of context as to be counterfactual.

The McKinsey Global Institute's (MGI) 2016 Report on their perception of California housing issues is available at:  https://www.mckinsey.com/featured-insights/urbanization/closing-californias-housing-gap.

This is not to say that housing is not expensive in parts of California, but rather that a shortage of housing is not the cause.  The causes will be discussed in a later post.

One set of issues is their analysis of available sites for more housing construction in San Francisco.  The map is problematic enough to deserve it's own separate post.  That post is here:
https://meetingthetwain.blogspot.com/2019/06/mckinsey-sf-density-cathedrals.html
(Spoiler - McKinsey lists Grace Cathedral - among other landmarks - as underutilized residential housing).

McKinsey's Thesis: ...is that there is a "housing gap" in California.  It is expressed in the statement that:


"..the combination of higher demand for housing and insufficient supply has inevitably pushed up California’s real estate prices"

Crucial to McKinsey's thesis is their "Exhibit 3" found on page 3 - the bar graph reproduced below. This purports to show that housing in California is expensive because California is 49th out of 50 states in "housing units per capita" - a metric which McKinsey derived from other census statistics.


Housing Units Per Capita
for 13 States
McKinsey uses this chart to argue that since being 49th makes California expensive then for California to become more affordable, it needs to 'catch up' with New York and New Jersey in housing units per capita.  To do this California needs to build about 2 million more housing units.

The chart shows Utah is 50th - meaning that Utah has the fewest housing units per capita - and Texas is 47th.  If California housing is so expensive because it is 49th on the chart then, by that reasoning, housing in Utah should be even more expensive and housing in Texas should be only slightly less expensive.


Texas 3 BR 1 BA, 1,641 Sq. Ft. Typical Home
(click on image to enlarge)
Clearly, there is no relationship between housing values and "housing units per capita".  McKinsey's chart and therefore its conclusions as to cause and solution to housing costs is invalid.

The error in McKinsey's argument is that households live in housing.  The household may be a single individual or a multi-generational family but one needs to look at housing units per household. not per capita.

Households sizes vary widely among states.  We can see this in the following chart of the household sizes of the 13 states McKinsey chose - with the US added as a red bar:

Graph 4:  (Click on chart below to expand)
Housing Units Per Household 2018
Same States in Same Order as McKinsey's Exhibit 3
Corrected for "household" instead of "per capita" we see a surplus of housing in every state.  California has 1,100 housing units (apartments, condos, or single family houses) for every 1,000 households.

In switching from McKinsey's metric of "per capita" to "per household",
By using the metric housing per capita (unique to McKinsey) instead of housing per household, McKinsey creates a housing disparity that does not exist.  Utah's household size of 3.14 is 34% bigger than Maine's 2.34.  That is why Utah has fewer housing units per person - because each household has more persons.

Florida's Excess Housing Units per Capita
Maine has an incredible 34% more housing units than households.  That's over 4 housing units for every 3 households!  This is because the Maine coast is a vacation escape from the sweltering Summers of the northeast urban areas.  For a sparsely populated state like Maine, it doesn't take many vacation homes to make a big difference.

The two examples of Florida and Maine show how much information is hidden by using housing units per capita. 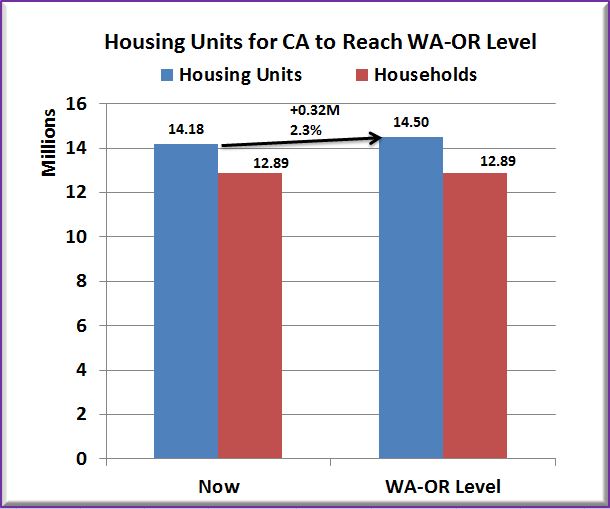 Here are the calculations:
To further illustrate the errors of McKinsey's "Exhibit 3" we look at graph 6 (below) which includes all 50 states ordered from left to right by McKinsey's "housing units per capita".  (Click on graph to enlarge).  It includes for every state average home ownership (bars) and "housing units per household" (purple line).

We see very, very little variation in housing units per household (purple line on top).  Note that New York (mentioned by McKinsey as a "reference case") is the only state with lower home ownership (54% - green bar in graph 6) than the 55% of Nevada (yellow bar) and California (gold bar).  Yet McKinsey selects New York as a model for California to emulate.

Housing Units Per 1,000 Households
2018 - With Home Ownership Rates
States in Order of "per capita" as in McKinsey's Exhibit 3
As seen above, West Virginia has the highest home ownership rate (73%).  This is because it is in economic decline.  Young people leaving school find no jobs near home so they leave the state.  Their families remain in the old family home that was paid off years ago and for which there are no buyers.  Most of the other states with home ownership above 70% have stable populations with lots of flat open space to build on.

"Housing units per household" actually varies a lot not just from state to state but quite a bit year-to-year even for the same state and the US as a whole.  Graph 7 below shows that the metric "Housing Units Per 1,000 Households" for the US varies from 1,080 to 1,120 over the 19 years 2000-2018.  That means the surplus of housing can run from 8% to 12% over 19 years.  The largest number of housing units per household was at the peak of the housing bubble in 2010.

"By focusing on units per person instead of units per household, we control for variations in household size that may be caused by differences in housing prices."

McKinsey is arguing that if people were to live together in households to save on housing costs then the number of people in a household would be artificially high.  This would skew the data on a "per household" basis.  I.e., they hypothesize that higher housing costs induce greater household size.

We can test this hypothesis to see if it is true.  By McKinsey's logic, if higher cost housing induces larger household sizes, then lower cost states should have smaller household size.  To see that is not the case look at the 13 states in graph 2 (repeated below) that McKinsey chose in their "Exhibit 3".  We saw before that Texas and Utah have large household sizes yet we see here (again) they have lower housing costs. 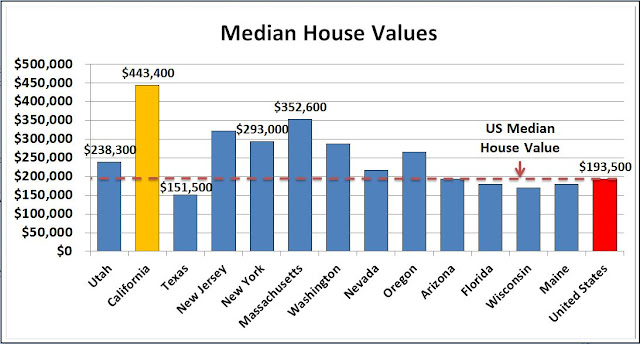 Of equal significance is that by 2018 the market was responding to the situation with near record construction rates.  Even by McKinsey's metric of "housing units per capita" the situation is being remedied without extreme measures needing to be taken.

A housing surplus of 8% is normal.  Additional homes are vacation homes, vacant apartments waiting for renters, housing in transition from one owner to another, etc.  The US Dept. of Housing and Urban Development document below discusses the number of second homes and the difficulty in counting them here:  https://www.huduser.gov/periodicals/ushmc/spring2004/article_USHMC-04Q1.pdf.

A US Census document describes the recent situation (see graph below).  In Q1 of 2011 there was a US vacancy rate of 9.7% in rental units and 2.1% vacancy in own-able units.  This was due to a surplus left over from the speculative over-building that took place during the housing bubble that peaked in 2007.  Eight years later (Q1 2019) this had shrunk to 7.0% vacancy for rental units and 1.4% for own-able units.  https://www.census.gov/housing/hvs/files/currenthvspress.pdf 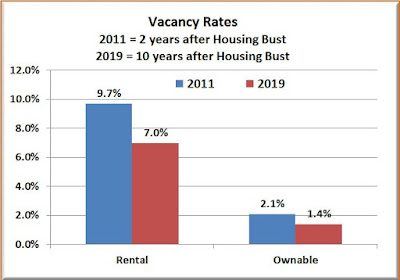 The home vacancy rate for California during the 2009-2014 period that McKinsey uses - which they term a period of "robust growth" - included the highest vacancy rates in the 33 years for which data was collected (1986-2018).

Graph 10:  (Click on chart below to expand)
In the next graph we see that New York state (McKinsey's "reference case") saw a much smaller variation in vacancies so there was relatively little decrease in home construction.  McKinsey's using New York state as a reference case again seems like "cherry-picking" data.  As the vacancy rates in California fell, home building there resumed.  In the last few years we see vacancy rates rising back to normal.  See graph 11 below:

Graph 11:  (Click on chart below to expand)
Vacancy Rate 1986-2018
NY and CA - Rental & Own-able
Of course, new home construction dropped precipitously during the post "housing bubble" period as seen in graph 12 below.  This was due to the record number of housing units sitting vacant (graphs 9 & 10, above).  As seen in graph 12 below, housing starts were over 20,000/month in 2005.  A year and a quarter (16 months) at that rate and the housing numbers could be the same as Oregon's or Washington's.  Even at the recent 2019 pace of about 10,000/month, that would take only about 3 years.  However since we saw earlier that housing quantity does not seem to correlate with price, even that is irrelevant.

We covered the mistakes McKinsey made to reach a number of a "gap" of 2 million housing units and found that, in fact, California has a surplus of housing.  Even if it is not enough of a surplus, it would only need at most about 2.3% more housing units to reach Oregon's and Washington's level of "Housing Units Per Household".  That number can be easily built at current rates.

That still leaves unexplained where the additional 1.5 million housing units McKinsey claims are needed by 2025.  That number is derived from expectations of future growth.  There are similar problems with McKinsey's analysis there but we will save that for a future post. 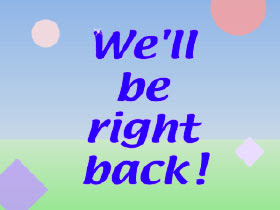 Posted by Michael Goldman at 4:31 PM