The "Myth" of a Housing Crisis 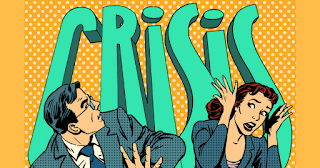 Crisis:  "A crucial or decisive point or situation, especially a difficult or unstable situation involving an impending change".  Does that describe housing in California?
California's legislative season is over and with it the death of some very bad legislation like SB-50.  This was legislation that would have ruined local communities, driving more Californians out of the state in search of a livable place to make their home.

With these nightmare laws dead (for now), we can take a look and see that in fact things are as they have been for the last 50 years.  California's home-ownership rate mirrored that of the US as a whole.  Ownership peaked during the housing bubble and then collapsed afterward.  It is now back to where it has been historically and is rising (see graph).  It remains consistently higher than NY State's, which is still declining.

Home ownership rate rises with average age.  For example, Maine and West Virginia have 73% home ownership rates because there are few jobs there so young people migrate to growing economies like California.  This leaves a lot of couples in W. Virginia in homes by themselves, and means there are more young people in CA or TX just starting out in life and renting until they can afford a home.

In San Francisco, ground zero for the so-called "crisis", the percent of rent/mortgage "burdened" households has dropped significantly.  That fraction is below that of not only Boston, but also Brooklyn, NY, and even relatively cheap areas like Portland, Oregon.


Rent/Mortgage Burdened Households - 2
(click image to enlarge)
One can reasonably argue that San Francisco is too expensive for lower income people so they migrate to other communities.  That may be, but even the other communities with lower housing costs have lots of people for whom "the rent is too damn high".  This suggests it is really an income problem not a housing problem.  Let's raise people's incomes with better education and training - that might actually work better than building luxury apts/condos with inadequate parking.

The progress graphed above was slow but steady improvement.  It came without the help of state intervention.  Just the normal ebb and flow of economics with local control keeping development at a human scale, in tune with local communities.

So where did the idea of a housing crisis originate?  Whence Governor Newsom's "3.5 million homes by 2025" urgency?


McKinsey's Contribution to the "Myth"

That "3.5 million homes" comes straight from the McKinsey Global Institute's 2016 Report "A Tool Kit to Close California's Housing Gap: 3.5 Million Homes by 2025".  Central to that was a chart of housing units per person.  See chart below:
McKinsey - Housing Units per Capita
McKinsey claimed that California being 49th in the above chart of "housing units per capita" was the cause of high housing prices in California - so their "solution" was to build more housing to fill this supposed "gap".

Except the bar chart makes no sense.  If being 49th caused California housing to be expensive then the 50th should be even more expensive. The 50th state is Utah.  And the 47th should be almost as expensive - the 47th is Texas.  Neither one is particularly expensive.  Might as well say it plainly - the graph is absurd.

It gets worse.  McKinsey then went on to hold up NY state as a model for California to emulate.  But we've already seen that in terms of "housing cost-burdened population" and "home-ownership rate" both NY state and city are worse than California and San Francisco, respectively.

It gets worse.  Switch from McKinsey's "housing units per capita" to a more reasonable "housing units per household" and the difference mostly disappears.  All the states then are seen to have a surplus of housing, including California.  See chart below:

The McKinsey report was probably the most widely cited and least read of all the promoters of the myth of a "housing crisis".  If anyone had read past the executive summary, they would have seen the above oddities. 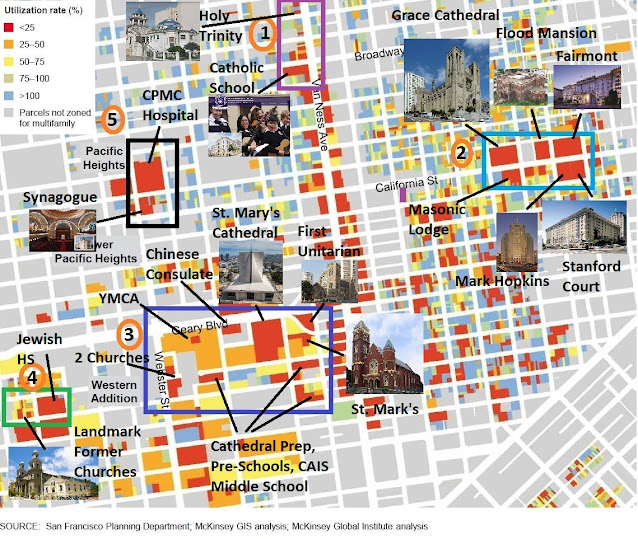 So okay, McKinsey's report is nonsense - but they couldn't create the "housing crisis" myth all on their own.  There were plenty of others with similarly bizarre ideas of pseudo-economics.

The LAO's Contribution to the "Myth"

California's own LAO (Legislative Analyst Organization) came up with an analysis of housing prices.  They concluded that if an additional 100,000 units annually had been built over the last 35 years, housing costs would have been lower with 100,000 x 35 = 3.5 million more housing units.  That is where the 3.5 million number originally came from.
C.f., https://meetingthetwain.blogspot.com/2019/03/lao-on-housing.html

This "build more to make the price go down" sounds reasonable at first.   But look around you now (September, 2019) and you see builders avoiding the SF Bay Area because rents and prices are declining a little.  C.f., https://www.mercurynews.com/2019/03/20/why-wont-developers-build-housing-in-this-bay-area-city/

With no idea of how low rents and prices will go, banks won't loan money for construction.  No one wants to get stuck with buildings that sell/rent for less than the cost to build them.  We have seen this before - 100% up followed by 10% down, then 100% up, and again 11% down.  When housing costs go down, builders look elsewhere until rents rise again.  The following chart shows these cycles going back to 1985.


So the "build more" idea doesn't work - as soon as the price drops even a little, the building stops and then at the next boom, the prices rise even more.  The LAO is hypothesizing that builders will build even when it makes no economic sense.  The LAO's hypothesis is clearly false as reality keeps repeating.
HCD's Contribution to the "Myth"
HCD = "Housing and Community Development"

California State's Department of Housing and Community Development (HCD) has made their own contribution to the "housing crisis" myth.  In a 2018 publication they showed home ownership in California as the lowest in 40 years.  HCD's graph is shown below:


Home Ownership Levels - US and CA
(click image to enlarge)

We saw earlier that California's home-ownership rate went up with the housing bubble and declined when the bubble burst - similarly to the rest of the US.  Yet for the graph above, HCD selected a small subset of available data to show only the decline.  This can be seen in the Federal Reserve Economic Data ("FRED") chart below:

US Census data on home ownership goes way back to the early 1900's which HCD acknowledges when they write "...reaching the lowest rate since the 1940s" (op. cit., page 18).  HCD knew there was more data and had to have had access to it or they couldn't have selected the data they published.  Yet HCD decided to show only a 10-year period of declining ownership.  HCD's report was published in 2018 yet they stopped their data selection at 2015.  The data comes out yearly so they had plenty of time to get the latest data for publication.
The HCD truncated data selection was cited early in California State Senator Scott Wiener's SB-50 (2019) as justification of the extreme measures in his bill.  Without the context of readily available real data in full context over a meaningful time period, this serves to promote the myth of a "housing crisis".


Putting a Builder in Charge of HCD 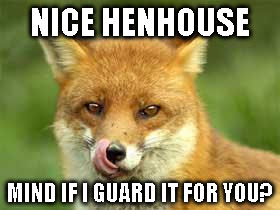 It is hardly a surprise that California State's Department of Housing and Community Development added to the myth when for years the person in charge of it was a developer himself.  Naturally he will have his staff cherry-pick the data so he can argue against single family housing and for "by right development" - i.e., fewer home ownership opportunities, more rental apartments, and no restrictions by pesky local residents and their elected representatives.  For his arguments in full see:
https://www.sfchronicle.com/opinion/openforum/article/Open-Forum-Four-ways-to-fix-the-California-14436147.php


Amador City, CA  Population 186...
... and declining
There are over a dozen counties in California that have actually lost population in the last decade.  There is no reason for anyone to build there.  So, those counties didn't "make their RHNA numbers" - i.e., no one built the housing to fill the zoned areas.  Because they "didn't make their RHNA numbers" they are subject to penalties under SB-35.  Those who don't understand RHNA numbers think it is cities and counties standing in the way of housing, so the myth gains traction.
C.f., https://meetingthetwain.blogspot.com/2018/09/ree-diculous-ree-na-part-i.html

Homelessness - is that the Housing Crisis?

Stories of the homeless and the displaced are always in the news.  But these problems are worldwide.  A report from Yale shows the US with about 0.17% of the population being homeless.  This is about average among the OECD countries - between Austria and the Netherlands - and well below the rates in Canada and Germany.  See bar graph below: 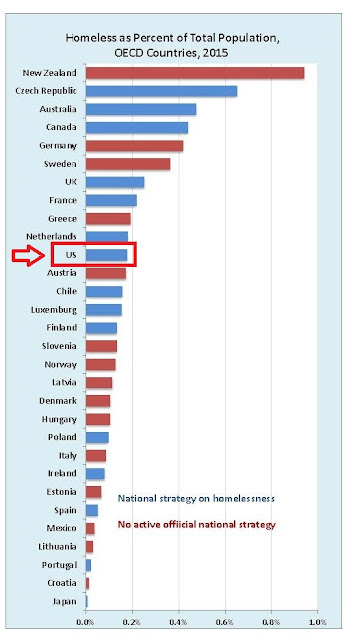 "Trends in homelessness among OECD countries with available data are mixed. In recent years rates of homelessness are reported to have increased in Denmark, England, France, Ireland, Italy, the Netherlands and New Zealand, while decreasing in Finland and the United States."
from: https://yaleglobal.yale.edu/content/cities-grow-so-do-numbers-homeless

More efforts and money should be put into housing the homeless - especially veterans and families with children -  but homelessness may never go away until humans find a cure for bad luck, addiction, mental illness, etc.

More housing and treatment centers would have been a worthy use for the $21 billion budget surplus California had last year.

The 2019 California state budget includes "$1 billion for homelessness—to support local governments in developing an integrated approach to tackle their homelessness issues." out of a 2019-2020 revenue of $144 billion.  From page 71 of CA State budget:
http://www.ebudget.ca.gov/FullBudgetSummary.pdf

One measure of housing affordability is home ownership.  In the US, about 64% of adults own their own home - a number that has been pretty constant over the last 5 decades.  In states with older populations it tends to be higher and in states with younger populations (like California) it tends to be lower but there are exceptions.  New York State, for example, has the lowest rate of home ownership.

By that standard, California as a whole is affordable - i.e., most people own their own home.  In all but two of the 58 counties in California the majority own the home they live in.  The only exceptions are the counties of San Francisco and Los Angeles.  Those two counties also happen to be where the major California media outlets are.

Looking at the following graph it is hard to determine any pattern.  Rural inexpensive Lassen County has about the same ownership rate as expensive suburban Contra Costa County, rural Colusa County about the same as very expensive Marin County.  See bar graph below (not all 58 counties are included for space reasons):
Home Ownership in CA by County
(click on graph to enlarge)

The myth gains even more traction as young reporters find that their salary doesn't go as far as they had hoped.

So what will happen with housing in California?  The same thing that has been happening since the 1970's when it started getting expensive.  Housing costs will decline a little more, maybe go flat for a while, and then go back up as more startups grow, bringing in well-paid talent that can afford the housing.  Some people will leave for less expensive places, others will come for the high-tech job opportunities. People will complain - they always do.  For most people it will all turn out right. 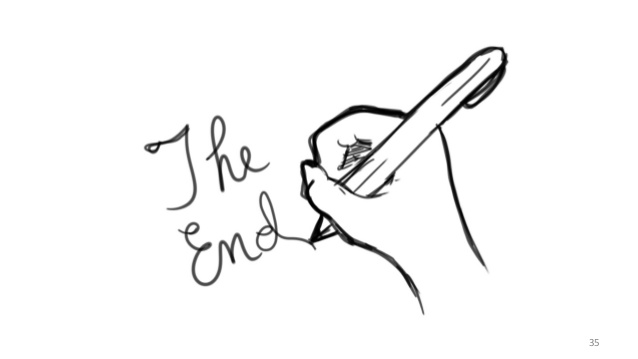 Posted by Michael Goldman at 3:05 AM