A Kerfuffle on Sunnyvale's Housing Benefit

Santana Talks!
This all predated my coming to the council by years.  I talked to the City Manager Deanna Santana about this briefly.  Here is her story:
-----------
She and her family moved here from Fremont.  She lives in a town-home in the Fair Oaks neighborhood with husband, high school daughter and grade school son.  Her husband commutes to his job in Fremont.  She took a pay cut to move here from her job in Oakland which she was leaving for other reasons.
-----------

And I think...
While I keep an open mind on this, it does seem that it is in the city's interests to have a few high level officials live here.  This enables them to see how life is lived here.  When people talk about the condition of the streets or parks the city manager knows from direct experience what that means.  It makes it easy to get to the scene of an emergency to make sure it is handled correctly.  This has actually come up and situations that were handled sub-optimally are being handled better now thanks to the city manager being on the scene.

In a $400M budget ($175M general fund) this is peanuts.  The city is not paying for the house, just subsidizing a little on the interest rate.  It isn't missing much in interest on the loan since cities are forbidden from investing in anything except super-safe bonds which these days are paying almost nothing.  Below are some town homes in the general area she lives in.  (Click on image to enlarge).

So - You For It?
That said, I think the city incentive program (which has been in place for years) covers too many people.  I can see getting the City Manager, an Asst. CM, and the head public safety officer to live here.  I don't know that the city benefits from having any other city employees live here.  I would be inclined to argue for reducing the number of beneficiaries of the program if it comes before me in a city council budget session.  Still, I keep an open mind on this - as on everything.

Long Commute:
This brings me to the city employee who "has to" commute 2 hours from Modesto.  Below is the commute from Modesto to the Sunnyvale Civic Center.  Google maps say it takes 1 hour, 34 minutes in the middle of a weekday with 7 "incidents" slowing down traffic on I-580. When we all have self driving electric cars recharged from our own solar panels, these commutes will probably increase as commuters read the paper, check email, or watch videos while the car does the driving. (click on image to enlarge) 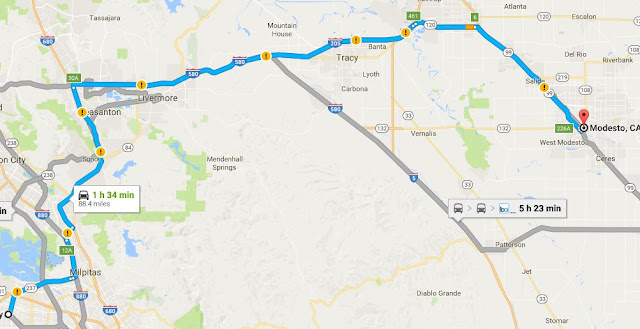 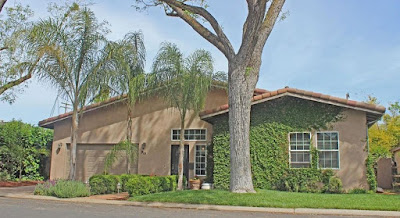 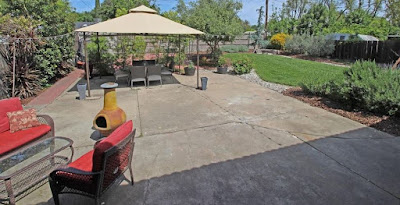 Tracy is about 40 minutes closer but more expensive.  Housing is definitely cheaper the further out you go.  Since bricks and mortar cost the same, the difference in price is the land.

What to do?
There is nothing anyone can do about the price of land.  There is only so much land to go around in Sunnyvale.  All the very highly paid engineers with stock options and both spouses working are buying up the single family homes.  Anyone who feels they must live in a single family detached home, not a condo or townhouse, and wants their spouse to be able to stay at home being a parent and home-maker, must commute.   The more house you want for your money, the further the commute.  Otherwise, the city would need to pay every employee about $400K per year to afford a very modest single family house in Sunnyvale of about $1.4M.

Build More?
Building more apartments just increases the value of the land (driving up prices further), traffic congestion worsens, school over-crowding increases, people can't get out of their drive-ways because parking is so bad...  Yet more apartments/condos do nothing to increase the number of single family detached homes for those who feel they must have that.  If there is any solution, it is get companies to stop expanding here - that is what is driving up the land values.  Maybe they should set up offices in Modesto!
Posted by Michael Goldman at 1:33 PM