California State Senators Wiener and Skinner with Assembly Member Ting have coauthored Senate Bill 827 in the California legislature.  The text of SB-827 as of 2/13/2018 is found here:
https://leginfo.legislature.ca.gov/faces/billTextClient.xhtml?bill_id=201720180SB827

(Update 2/15/2018 - The San Francisco Planning Dept. issued an analysis of SB-827 here:
https://drive.google.com/file/d/1ym-kDtOlJccJtxpCTFEF0Rzj0osciV4G/view . It includes a point I overlooked.  All the buildings will get a "State Density Bonus" so the limits specified in the bill will all be higher in practice.)

The core of SB-827 is that within certain areas of transit stations or corridors, the state of California overrides any maximum height restriction that the local city or town can impose.

If there is a neighborhood of single family homes within a half mile of a train station, the state mandates any future building there can be up to 8 stories high - 10 stories if they add in some "below market rate" housing.  There is no requirement for parking or consideration of blocking sunlight from houses or parks, increased traffic, or exterior appearance of the building.  It can be as ugly as sin, block the sun from all the neighboring houses, and cause constant traffic gridlock, but "too bad - deal with it" is what you get from SB-827.

There is no requirement that any savings in construction costs by the builder be passed on to the tenants.  Since rents are determined by "what the market will bear" this will not result in any reductions in rent.

SB-827 over-rides local control of height, parking requirements, setbacks, exterior appearance and any other requirements that would increase the cost of construction of apartments by any amount whatever.

The implication is that this will reduce the cost of housing in high housing cost areas but this simplistic misconception of how economics works is incorrect.  I discuss why it is incorrect here:  http://meetingthetwain.blogspot.com/2017/01/live-work-commute-2.html

There is a companion bill SB-828 which will receive it's own examination.

No Zoning Limits:  SB-827 does not respect residential zoning limitations of any sort.  I have met people who think their town or block is safe from having ugly 6- to 10-story apartment buildings imposed on it because they are zoned 1-story residential.  This bill does not say anything whatever to indicate it only applies to areas zoned for apartments.  Blocks of one-story buildings zoned "single story overlay" are just as likely to have 6- to 10-story apartments built next door as anywhere else.

Quoting from the bill:

"(4) (A) If the transit-rich housing project is within either a one-quarter mile radius of a high-quality transit corridor or within one block of a major transit stop, any maximum height limitation that is less than 85 feet, except in cases where a parcel facing a street that is less than 45 feet wide from curb to curb, in which case the maximum height shall not be less than 55 feet. "

Estimate 10 feet per story so 55 feet is at least a 5-story apartment but with the State Density Bonus this becomes 75 ft. or a 7 story building (see "update" above).

Since El Camino Real is a major transit corridor, we can expect to see 7-story apartments imposed within 1/4 = 0.25 miles of El Camino on either side.  Here is a map of El Camino and Hollenbeck in Sunnyvale, CA.  The distance shown is 0.2 miles.  The red rectangle encompasses a street of one story homes that can have a 7-story apartment built among them.  No one can prevent it if SB-827 passes. 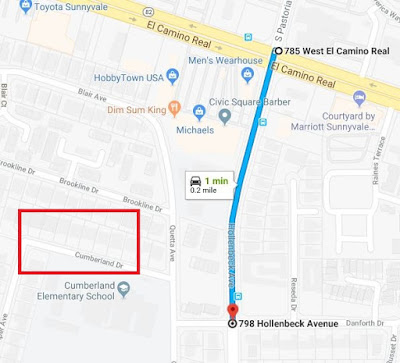 A street view of the area in the red rectangle above is shown below:

Since Cumberland Drive is less than 45 feet across, it's maximum height may not be set by the city to less than 75 feet (7 stories) as seen above.  Since the builder will not need to put in parking spaces, that is a lot of parking on a few streets.

Looking at the map of that area again, we see all those new residents would have to get out of their area though one two lane street - Danforth shown below:

1.  Time:  This is forever.  There is no time after which the law will cease to apply.  Were the "housing crisis" to be resolved after ten years so that thenceforth housing is cheap and plentiful it would make no difference, the law would remain in effect.  The law as proposed never removes any of the over-rides of local control for height, parking, or appearance.  They stay in effect after the situation they are supposed to address no longer applies.

2.  Geography:  There is no geographical limit to this.

Excerpt from the bill:  "The bill would declare that its provisions address a matter of statewide concern and apply equally to all cities and counties in this state, including a charter city."

It applies to Modesto, where housing is cheap, as well as to Beverly Hills where it is expensive.  (Click images to enlarge)

3.  Transit Capacity: There is no attempt to link the construction of housing with the ability of the local transit system to accommodate the increase in traffic.  As long as two buses happen to go along a street separated by 15 minutes or less during morning and evening rush hours it is considered a transit corridor.  If the buses are making a run along a narrow side street connecting several main arteries there may not be room for much traffic but the apartment building of SB-827's specified height can be imposed without regard to the traffic capacity of the street.  No parking requirements may be imposed by the local city or town.  The building can have no off-street parking whatever.  There is no requirement that any savings from this be passed on to renters or buyers.

4.  Solar Shading:  There is no consideration for solar panels.  Suppose, for example, a nearby school has just spent $1,000,000 installing solar panels on their roof.  If someone wants to put up 105 foot high apartment buildings allowed by SB-827 no one can stop them.  If the buildings completely shade the new solar panels making the school's investment useless, there is nothing anyone can do.

5.  Parks:  There are no provisions for local conditions.  If a lot of 105-foot 10-story apartment buildings put a neighborhood park in permanent shade so that all trees die and no children want to play in such a dismal park, there is nothing anyone can do.
6.  Historic Preservation:  Some cities like Sunnyvale maintain a "Heritage District" near the train station protecting homes and small commercial buildings dating from the early agricultural days of Santa Clara Valley.  SB-827 would over-ride those protections.  SB-827 is quite clear that no imposition of any requirements regarding parking, set backs, or aesthetic considerations that cost any money whatever may be imposed on the builder.  This includes appearance.  Quote from the bill:


"(b) Notwithstanding any local ordinance, general plan element, specific plan, charter, or other local law, policy, resolution, or regulation, a transit-rich housing project shall receive a transit-rich housing bonus which shall exempt the project from all of the following:
(1) Maximum controls on residential density or floor area ratio.
(2) Minimum automobile parking requirements.
(3) Any design standard that restricts the applicant’s ability to construct the maximum number of units consistent with any applicable building code."
This means that any apartment building can be built as cheaply as possible with no consideration of looks or the neighborhood character.  Sunnyvale has a protected historic neighborhood near the train station.  SB-827 as originally written disallows any restriction.
7.  Broad Swath:  Quote from the bill:

(4) (A) If the transit-rich housing project is within either a one-quarter mile radius of a high-quality transit corridor or within one block of a major transit stop, any maximum height limitation that is less than 85 feet, except in cases where a parcel facing a street that is less than 45 feet wide from curb to curb..."

Another example - this time in Santa Clara, less than a quarter mile off of El Camino but right on Calabasaz Blvd.  Recall that with the State Density Bonus, 85-ft buildings can become 105 feet buildings.  Calabasaz is certainly more than 45 feet wide so someone can put in a 105-foot tall apartment building (10 stories).  First the map, then the street view: 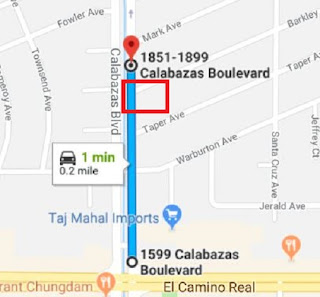 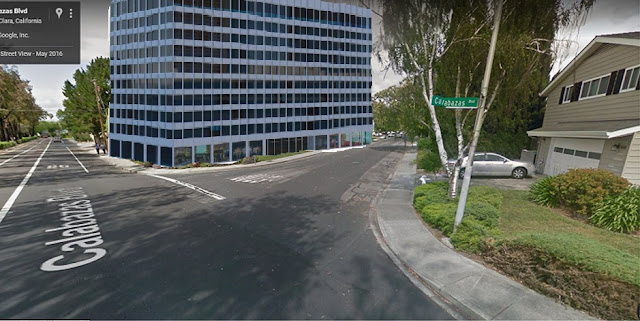 There is much more to say but this covers the basics.
Posted by Michael Goldman at 11:50 PM