Summary:  I explore population growth and show no city or country grows indefinitely.  I then explore the limits as observed in various populations including California's.  People move around.  People want a single family house and will do what they must to get it.  Growth is not an unalloyed good and increased density is not always desirable.
Addendum 3/22/2018:  Charts added for various cities around the world.  This is at the very bottom so go to the end and work up if that is your main interest.

An article was sent to me decrying the apparent fleeing of lower income people from California to other states with the inevitable conclusion that we must build more housing!
http://la.curbed.com/2016/3/4/11161626/california-housing-costs-migration 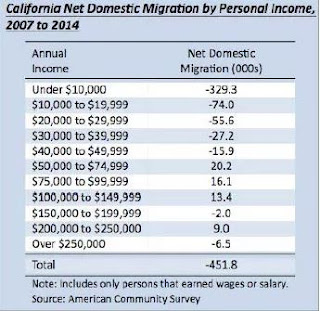 (Note that the big net migration is those making under $10,000.  A lot of those are students moving to college, or those who just finished HS or college and are trying to land their first job.) 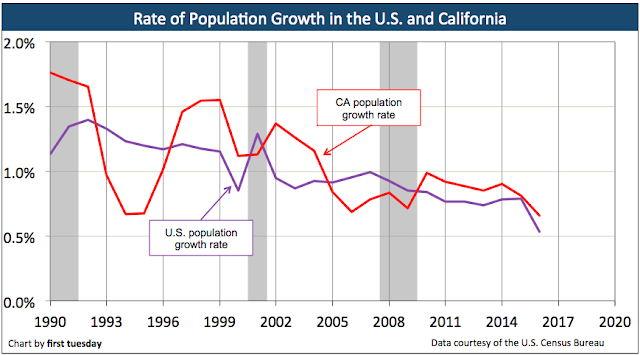 California's growth has been slowing for decades (as seen in the red line above).  The population may be reaching its maximum soon.  People come, people go.  Americans have always been on the move - that's how they got to California!  So far, California and the SF Bay Area have known only growth, but other states stabilized population decades ago.  CA will also stabilize at some time.  Maybe now is the time.

Much of the movement to other states happened immediately after the 2007 housing crash.  Over the last 5 years, 31 states (including CA) gained population, while 19 states lost population including NY, NJ, and PA as is shown here: http://www.governing.com/gov-data/census/state-migration-rates-annual-net-migration-by-state.html  An excerpt is shown below (click image to enlarge):


The Math of Growth

Every city, every state, every country, every planet has a limit to growth.  It can sustain a population up to what economists and biologists call the "carrying capacity" and then it cannot expand further.  Growth is governed by what is called the "logistic equation" which is a solution to a differential equation governing resource consumption and production.

When production equals consumption, no further growth is possible for more than a very short time after which there is a population collapse followed by stabilization at the carrying capacity.  This equation has been known and studied since the 1800's.

Ultimately, US states and cities will achieve approximate economic and demographic equilibrium, though at what level we will only know in hindsight.  I do not see this as anything other than the natural order of populations due to resource consumption and production.  Resources can be broadly defined to include available land for single family housing since many see that as their dream.  Sunnyvale simply does not have enough land for everyone to have that.  We can build all the apartments we like, but those seeking a detached single family house will not be satisfied with that and will move elsewhere.

There is a myth going around that the paramount goal of everyone is to be able to walk to work and they will endure any living conditions to achieve that goal.  That is simply and clearly not true and you can see that anywhere you look if your eyes are open.

More people prefer to live where they can afford a house like this.. 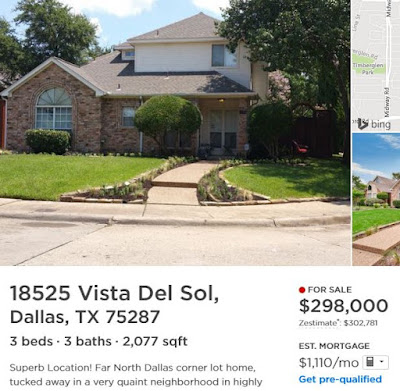 ...so Texas grows and New York doesn't.  People will move to a location where they can afford that home.  In the SF Bay Area, the urban commute routes from work to that American Dream Home get more and more jammed.  Even with good public transit like NYC's, commutes take longer and longer.  People will then pay more and more to live closer to work driving up property values near work places.  This in turns causes those that can't keep up in the bidding wars to leave the area.  Same in NYC as in SF Bay Area.  See price map below: 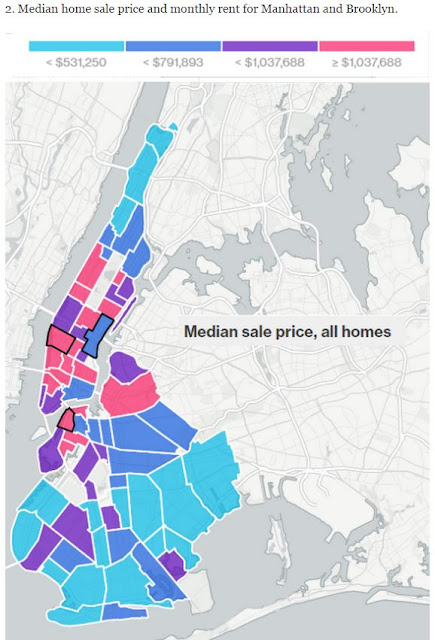 NY City is served by the NY Subway system (1890s), the Long Island Rail Road (LIRR - 1834) and similar transit systems.  NYC reached 7 million people in 1930.  We can estimate it's carrying capacity of roughly 7.5 million reached in the 1940's.  (see chart below)  It has oscillated about that population ever since.  The black line below is NYC total.  Manhattan's population (blue line below) peaked in 1910 at 2.3M and is now 1.6M.  Brooklyn's population (green line below) peaked in 1950 at 2.7M and is now 2.6M.
Despite Manhattan's population decline, Manhattan is considered a top tourist attraction and for many is a desirable (and expensive) place to live.  So population decline is NOT symptomatic of decay.  In fact, with the overcrowded and unhealthy tenements gone, Manhattan became better than ever.

...And Now
Low Density
Palo Alto is in CA but Palo Alto Ave. is in NYC.  Below are the price estimates for the houses in the Palo Alto Ave. picture from Zillow April, 2017.

New York City with...
...Big Yards and Many Trees 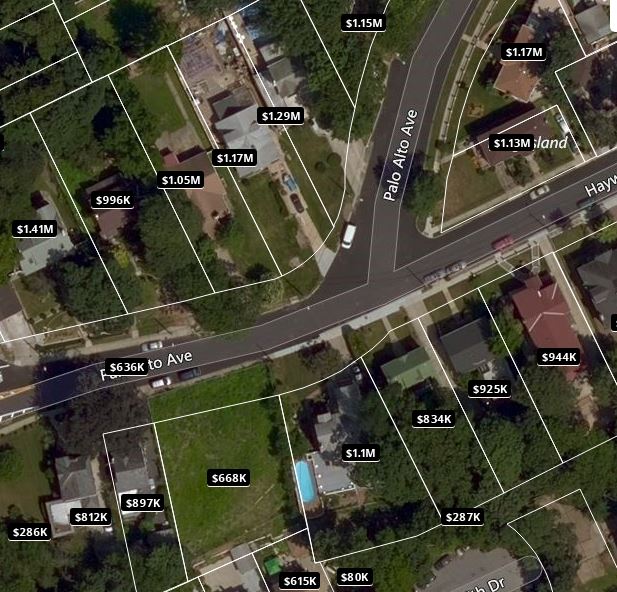 The prices aren't as high as in Palo Alto, CA because salaries are not as high.  Also, this part of Brooklyn is further from the Lower Manhattan Central Business District so prices are lower for that reason - see the price-colored map of Manhattan and Brooklyn above.

Suburban Living in New York City
Chevy Chase is in MD but Chevy Chase St. is in NYC.

"The Bronx" is Still in New York City
People like to live among trees and with greenery
The above photo is not what most think of when they think of the Bronx.

The total population of the NY Metro area is 24M = 8M in NYC + 16M in the suburbs.  There are twice as many people in the suburbs of NYC as in the city itself.

Populations overshoot (Japan, China, Germany) but then population diminishes back to a stable value equal to the carrying capacity.  Japan's population has decreased by 1 million in the past few years and is expected to stabilize at around 80 million = 2/3 of it's current 125 million (thick red line in middle).   (click image to enlarge) 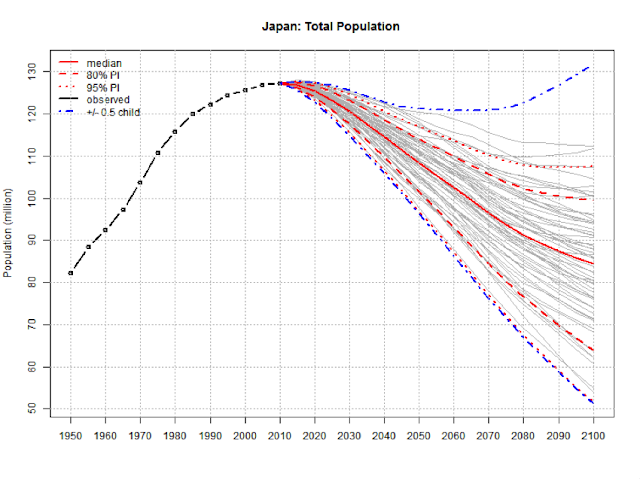 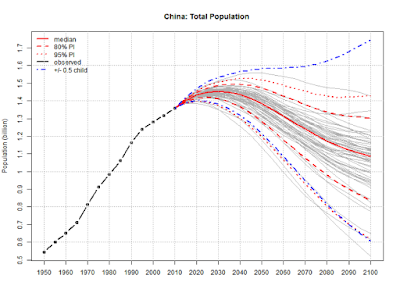 Addendum 3/22/2018 - Charts showing various cities around the world peaking and in some cases declining.

Taiwan:
and the following from a Taiwanese govt. web page.

Taipei:
Osaka-Kobe-Kyoto
The Japanese metropolitan area of Osaka-Kobe-Kyoto is not growing any more.  It has excellent rail transit, privately run and profitable, yet ridership is declining. 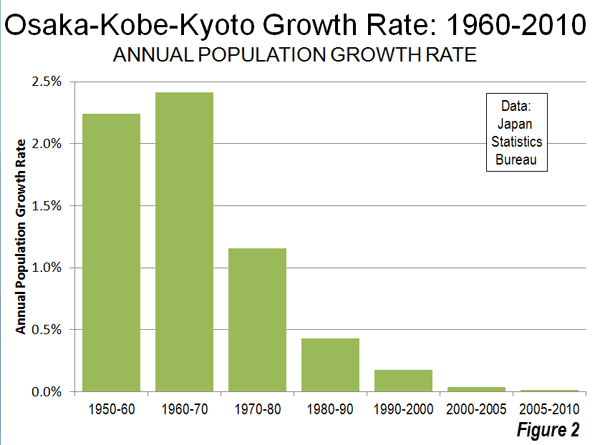 "As is typical of major metropolitan regions in the world virtually all of the growth in Osaka-Kobe-Kyoto since 1950 has been outside the historically core municipalities. Only 150,000 of the 6,250,000 population increase from 1950 to 2010 was in the municipalities of Osaka, Kobe or Kyoto. The suburbs accounted for nearly 98% of the region's growth.

"As growth came to a virtual stop, however, the historical core municipalities have done better. Between 2000 and 2010, the municipalities of Osaka, Kobe and Kyoto had added 125,000 people, while suburban areas lost 79,000. The net result was a 46,000 population increase between 2000 and 2010."
http://www.newgeography.com/content/002750-the-evolving-urban-form-osaka-kobe-kyoto

The SF Bay area and California are not capable of infinite growth.  No area is.  We have had growth in CA and the SF Bay area for some time.  It will eventually end because it must.  Stability is just that - stability - it is NOT something to be afraid of.
Posted by Michael Goldman at 8:34 PM