While visiting Grand Tetons National Park I stumbled on some historical photos of the 1920 "All Woman Town Council of Jackson Hole" which was called the "Petticoat Council".   In researching this, I found there have been a number of "Petticoat Councils" around the country over the years.

In fact, female suffrage was a topic of discussion since the opening of the west - a young Abe Lincoln running for congress in 1846 had included votes for women as part of his platform

Here are some "Petticoat Councils":

The first appears to be 1888 in the small town (population 198) of Oskaloosa, Kansas, (current population 1,117) - the county seat for Jefferson County.
"Oskaloosa appeared so shabby that many of the town’s businessmen thought women could do a better job of running the town than its all-male city council, ... and a ticket of women was fielded for the April election.

"With women having been granted the right to vote in municipal elections in Kansas [in 1886]... the turnout for that spring’s election of a mayor and five city council members was larger than ever before. By the time the polls closed, the slate of women had been elected to office by a 3 to 1 majority. Congratulations poured in from all over the world as newspapers from as far away as New Zealand carried stories of the ladies’ triumph.

"Dubbed the Petticoat Council, the ladies soon began to clean up the town: New sidewalks were built. Streets were improved with regular maintenance ordered, and gas street lamps were installed. A city pound was established to hold stray livestock, and the city treasury increased to $165. And that was all in the ladies’ first year of office."

The following short snippets from the Oskaloosa Independent note how other papers in the region took note of the election of an all female city council in Oskaloosa:

"The Topeka Capital: "Dispatches from Oskaloosa announce the election of a city ticket composed entirely of women.  This is the first town in the United States electing ladies to the office of mayor and council.  The Capital congratulates the good citizens of Oskaloosa and predicts for the new administration a splendid record.  Oskaloosa is one of the towns in Kansas where liquors are not sold for any purpose." (see image below)
The Leavenworth Times: "Oskaloosa is the first city to elect women for mayor and city council.  Oskaloosa is one of the most intelligent communities in Kansas, and doubtless knows what it is about."

Women got the vote in Oregon in 1912 - eight years before the 19th amendment made it a national right - and in 1916 Umatilla, Oregon (population then of 198) elected a city council of all women.
A newspaper article of the time reported:

"The present administration had been letting city affairs run along the lines of least resistance. Laws were slackly enforced, city improvement was at a standstill and Umatilla was rapidly retrograding back into the sagebrush stage of years ago ... [A] change of administration was needed for Umatilla if that town is to grow, the need was realized and the woman of Umatilla arose to the occasion.

"The plan was hatched under the guise of a card party held at the home of Mrs. C.G. Bromwell, whose husband was on the city council at the time. There, the women discussed the particulars of who would run for which office and agreed to quietly canvas for support without revealing their plan."

"There has been a great deal said about the so-called petticoat government and many wild speculations made as to how we would manage the city affairs, being mere women. However, we will manage without a shadow of a doubt. And if I did not believe that any woman on this council was not as competent and capable as any man who ever occupied a chair in this council, I would resign right now."  more at: https://www.damninteresting.com/the-petticoat-rebellion-of-1916/

"When the votes were tallied on Dec. 5, 1916, women had taken over the four council seats on the ballot, the positions of recorder and treasurer, and, most notably, Laura J. Starcher had ousted her husband, E.E. Starcher, the incumbent mayor. She won by a landslide count of 26 votes to eight votes."
From: http://time.com/4583710/umatilla-100-years/

The outgoing male politicians were stupefied, and E.E. Starcher (who lost to his wife) demanded a recount.  But the women had won and proceeded to govern well.

In 1920, Jackson Hole had a population of 307 and was starting to grow as a way station to Yellowstone Park.

"The town struggled to maintain basic infrastructure. Some prominent townswomen decided they would take matters into their own hands. Grace Miller, Rose Crabtree, Mae Deloney, Genevieve Van Vleck and Faustina Haight ran on a platform promising to collect overdue taxes so that they could clean up Town Square, control free-roaming livestock and dogs, increase access to the cemetery and improve road conditions.

They won all five seats, with Grace Miller beating Fred Lovejoy for mayor, 56 to 28. The all-woman Town Council was able to expand sewer and water systems, install electric lights around Town Square, extend phone service, and build drainage for the roads. The council also appointed women to prominent positions: Marta Winger as town clerk, Viola Lunbeck, town treasurer, and Edna Huff, health officer."
Of Marshal Williams who was appointed sheriff in 1920 - "... in truth her duties typically involved bringing drunken cowboys to jail for the night or keeping stray cattle out of Town Square."  She quit after a while, returning to the soda fountain she had worked at.  She eventually graduated from the University of Wyoming and married John Hupp in 1927.
From:
https://www.jhnewsandguide.com/special/jackson_hole_woman/article_030bc2f8-7ac6-51e2-aa67-ea6a43b4b6cb.html

"On November 2, 1920, the citizens of Yoncalla, Oregon, got a big surprise as the ballots were tallied in their local election. All the incumbent men on the city council had been voted out. Yoncalla, a small town of 323 residents about 40 miles south of Eugene, had voted in an entirely female city council.

"Mayor-elect Burt was quoted: 'We intend to study conditions and do all in our power to give Yoncalla a good, efficient government. At the worst, we can’t do much worse than the men.'”
from: https://www.theatlantic.com/politics/archive/2016/10/we-cant-do-much-worse-than-the-men/503432/
The reality of Yoncalla, may be a little more prosaic than "feminist uprising".  'Local sources' say the men may have given up their unpaid part-time municipal duties to let the women give it a try.
https://www.neatorama.com/2016/10/13/The-All-Woman-City-Council-of-1920/

"On June 8, 1948, the town election in Clintwood, VA drew national and international attention when the voters elected an all-female town council and mayor.

Letters poured in from around the world wishing them luck and expressing amazement that an all woman government could be elected anywhere. The State Department featured the story in its Voice of America broadcast."

Moving past US City Councils...

Several years before the 19th amendment passed in 1920 making female suffrage available throughout the US, a number of states had done so.  By 1917, forty states had legalized woman suffrage.  Montana was one of them and elected the first woman to the US house of Representatives - Jeannette Rankin.  She served one term the first time in 1917 and was re-elected again in 1941 for another term.

Those are all the "Petticoat Councils" I could find.  Ideally, women in politics would not be noteworthy.

I omitted many fascinating details in the interest of brevity.  I encourage reading the sources linked to for more about the "Petticoat Councils".

I can't end this without some charts.  This shows the rise of the number of women in the US Congress from 1917 to 2017. 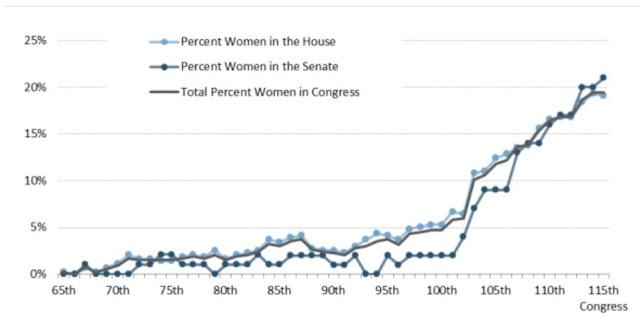 Here is a comparison of women in state legislatures vs. US Congress from 1971 to 2017.

http://sweetheartsofthewest.blogspot.com/2015/02/1920-petticoat-government-of-jackson.html
Posted by Michael Goldman at 12:42 AM